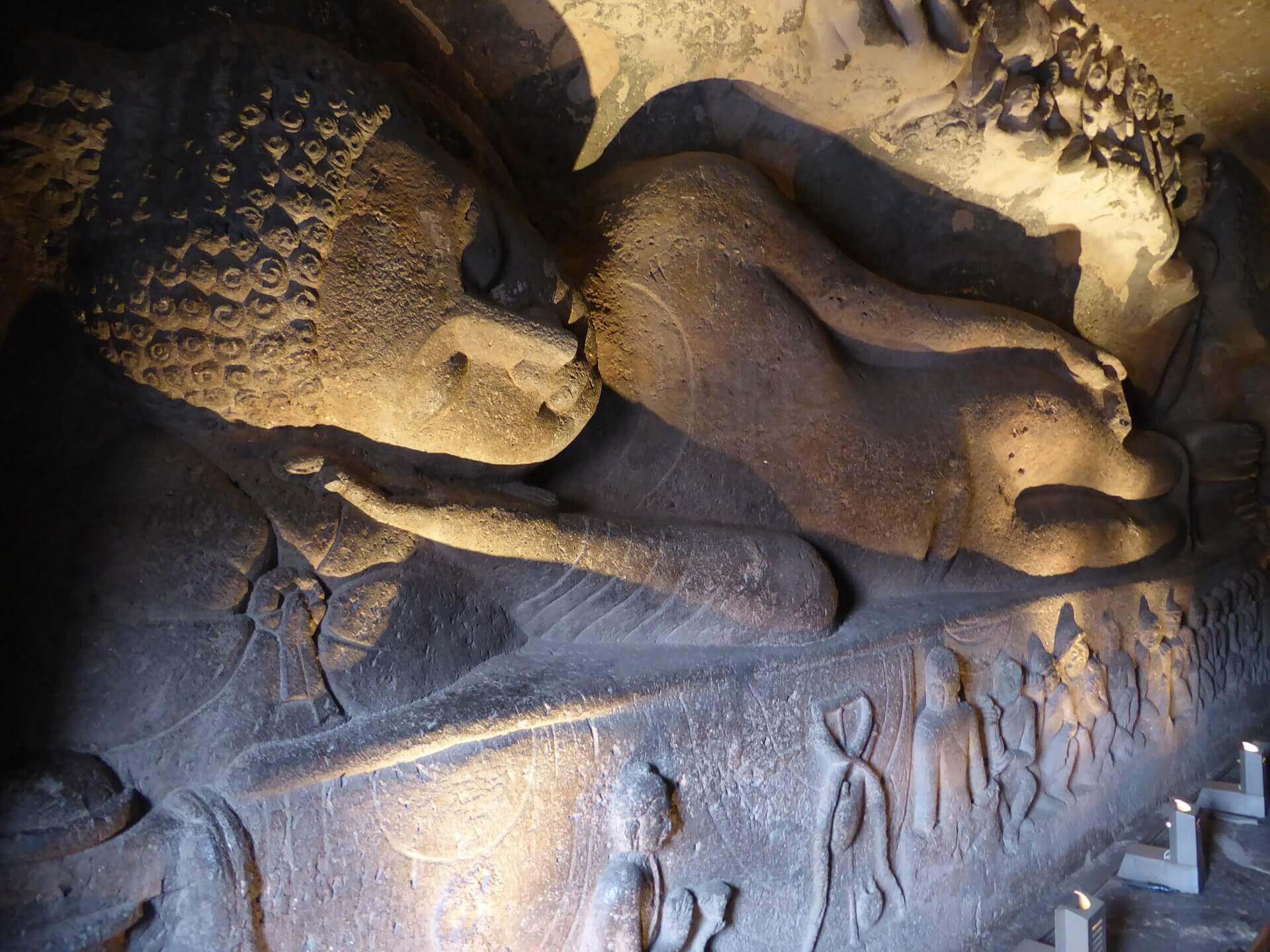 With a chisel and a rock, do you think you can change the outlook of the world? Sounds bizarre, right? As a matter of fact, it is not. India did this many, many years ago and made an impact that landed it onto the UNESCO World Heritage Sites list.

Ellora in Maharashtra has carved the rich history of India to perfection. It is a celebration of the artistic capacity of mankind showing us that we are capable of transforming a mammoth rock into a piece of art. This amazing destination in India has very well established that different religions can coexist. So, if you are planning a trip to India, then, visiting Ellora caves will help you understand the country’s roots. Are you in for that? Then, here is the Ellora Caves information you will need.

FROM THE CRYPTS OF ELLORA CAVES 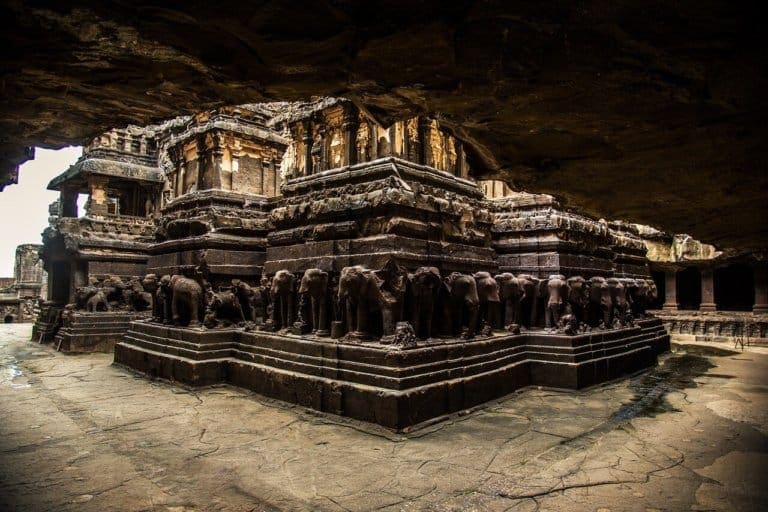 India is the land of colossal diversity, you know that right? So, what makes you think that its best-kept, rock-cut treasure and one of the top Indian tourist places will be any different?

Ellora Caves brings to you the best concoction of religions in the most extravagant form. That too from a time when creating magnanimous marvels like these, was very much a task. Its sprawling 34 caves are excavations from the vertical face of Charanandri hill in Maharashtra. It is here, you will come across 12 mesmerising Buddhist Caves, 17 intricately carved Hindu Temples and 5 serenely beautiful Jain Temples. Wait, that’s not all! Do you know that the Ellora Caves is home to the largest monolithic excavation in the world? Well, now you do.

There are over 100 caves on this site, out of which only 34 are open to the public. Besides being a paragon for all the religious rendezvous, Ellora cave is believed to be an important focal point for trade in the Deccan region too. So, do look out for its influence on the structure during your visit, okay?

THROUGH THE RAVAGES OF TIME- ELLORA CAVES HISTORY 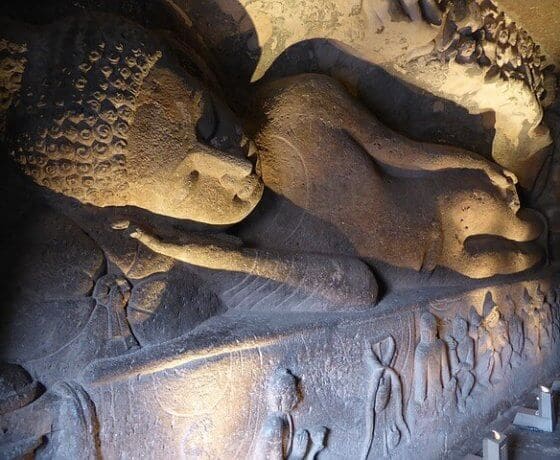 The beguiling murals of Ellora cave temples on an iconic trip to India narrate a story that’s like none other. Moreover, its timeline lies somewhere between the 6th to the 10th century. During this time, Ajanta was being deserted, which led to the carving of yet another cluster of cave structures in 550 AD.

The cave jaunts in Ellora bring back to you the time when Buddhism in India was dwindling and Hinduism was restoring in the states. It was during this time, the Chalukyas and the Rahtrakuta were emerging as the flag bearers of the movement called the Brahmanical movement. In fact, most of the Ellora carving took place during this time only. And this includes the monolithic marvel of the 7th century we were talking about earlier. Got caught up in the history of these caves already? Well then, brace your heart as we are sure that the 65 million years old rocks here will definitely make you go bananas.

WHAT TO SEE IN ELLORA CAVES? 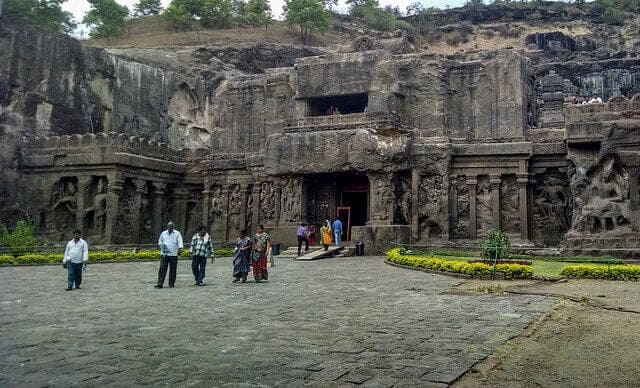 Buddhist caves in Ellora (Cave 1-13) are no different from that of Ajanta and were the earliest structures to be built here between the 5th and 8th century. Some of its artistic charms are:

Cave 2 – Because bigger is better! 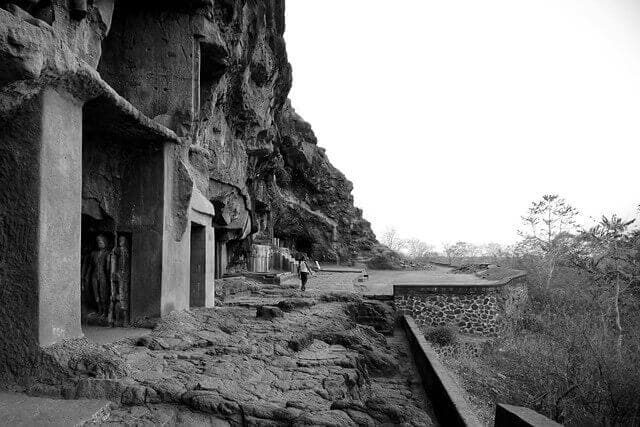 A broken Verandah, a dainty hall and mammoth galleries to lose your all, Cave 2 is a Buddhist monastery that can win every history buff’s heart. You will catch the first sight of this cave after toiling up some stairs. Mark our words, the first thing you will notice there will be its ornate pillars and a grandiose structure of Buddha sitting on a lion throne facing the setting sun.

Are you a patron of Buddha too? If yes, then you are going to find him left, right and centre, sitting in different postures along with different deities of Buddhism here. That sounds intriguing, doesn’t it? 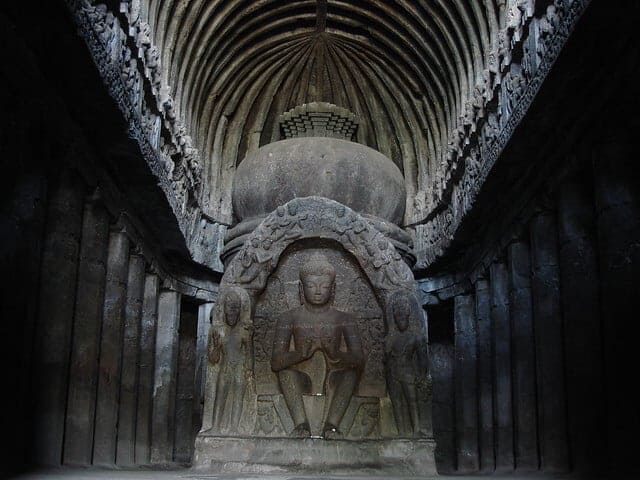 Are you looking for the most famous Buddhist cave in Ellora Caves India? Well, with cave number 10 of Ellora India on your list, your wait is over. Call it by whatever name you like, Vishwakarma Cave, Carpenter’s cave or Chandrashala, there is one thing that’s certain, mesmerizing artistic treasures are coming your way.

Festooned with a starling multi-story entry is this Stupa hall. As you will pan its nooks and crannies you will realize that the stone ceiling here is carved to give the effect of wooden beams. Whoa! Also, you will come across a 16 foot tall Buddha statue in preaching pose. Sounds music to ears, doesn’t it? 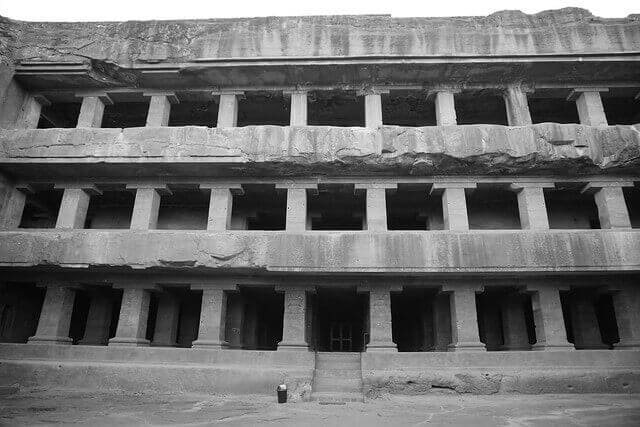 Tootle around the rugged routes of Ellora just to land on a three-storey wonder. It is here that a ginormous yet beautifully carved gate will welcome you to a huge courtyard. There are three levels to this large monastic complex, each one of which holds a certain value. The lowermost level of this complex permits travellers to come face to face with Boddhisatva’s frescos.

As we have already discussed earlier, the rise of Hinduism in the 6th to 8th century depicts the change in the architecture of the caves later made in Ellora. All the caves from 13 to 29 are Hindu Caves. Most of these caves were made during the Kalchuri period. Furthermore, you will see a common feature in all the caves, a lingam-yoni (depicting Shiva) at the centre of the shrine. Want to know the most famous of them all? Here you go!

Cave 15 – a window to Hindu mythology 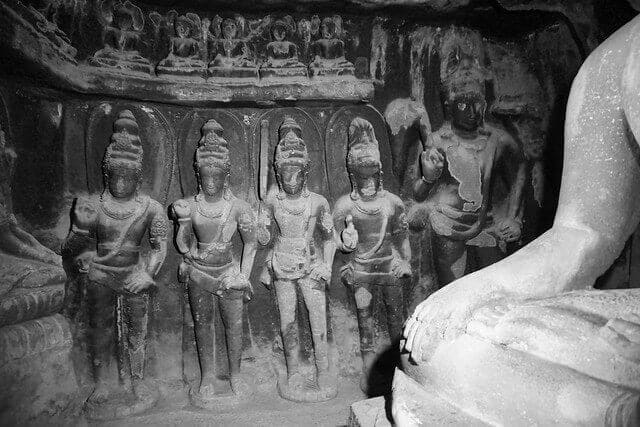 Cave 15 is an architectural splendour also called as the Das Avatara (ten incarnations). The cave is a tribute to the ten incarnations of Lord Vishnu celebrating the victory of good over evil through the ravages of time.

This finest cave of Ellora flamboyantly showcases the powerful trinity at their absolute best. If you are on a cultural trip to India, then we are sure, you will love the carving of Shiva Nataraja here. And, if still, your heart craves for more, the image of Shiva emerging from a lingam (phallic image) will definitely please your travel appetite. 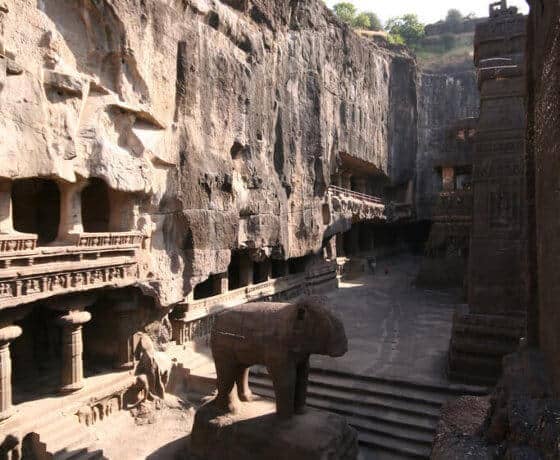 Hail to the earliest of the Hindu caves in Ellora India! Also, known as Rameshwaram cave, Cave 21 is a portrayal of Shaivite scenes similar to that in the early temples of India. This shrine has on display the best of carvings with a common element of Lingam.

There are illustrations of various deities in this shrine. Out of which the figure of Goddess Ganga residing on her vehicle Makara (mythical sea creature) steals away the spotlight.

The five caves lying to the north of the Ellora belong to the Digambara sect. Furthermore, they were excavated in the 9th to the 10th century.

Smaller than the Hindu and Buddhist Caves, Jain Caves have similar architectural attributes of Hindu caves such as mandapa and a pillared verandah.

The Jain temples have the carvings of the yaksha and yakshi, gods and goddesses, and devotees all depicting the Jain mythological sensibilities of that time. 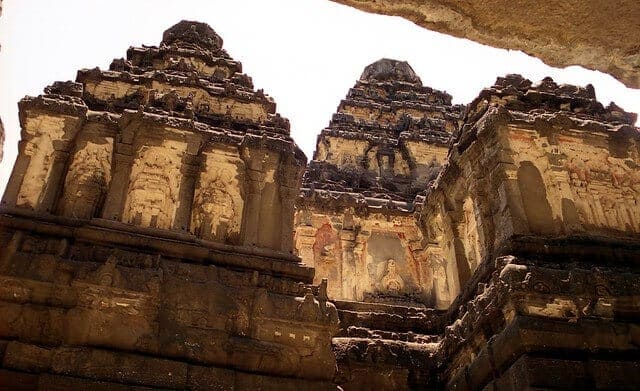 Chota Kailash is yet another artistic manifestation of the 9th century and apparently is built along the same line as that of the Kailasa Temple.

Popularly known as the Indra Sabha, this temple showcases the courtroom of the King of Gods. With two gigantic statues of Indra, an eight-armed and the other a 12-armed statue in a dancing pose, this cave brings to its visitors the best of India’s ancient assets. Other than that, you will also find other deities here.

THE GIFT OF THE SANDS OF TIME- THE KAILASA TEMPLE 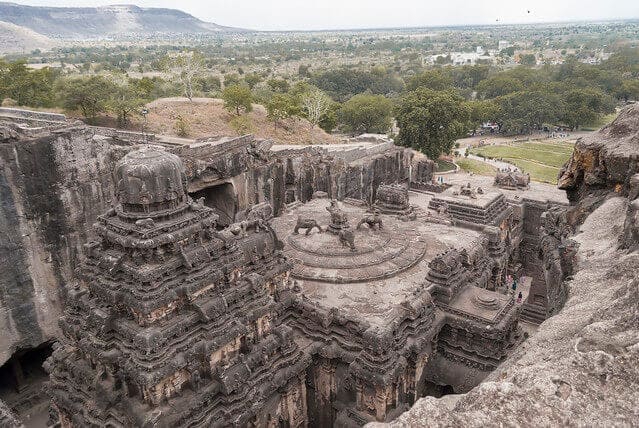 Redefining finesse and architectural brilliance is the very revered Kailasa Temple built by King Krishna in AD 760. This largest monolithic structure excavated by hand is a miracle in its own. A small miniature of Mount Kailash, this rock cut beauty flaunts the magnetism of Rashtrakuta architecture.

It took the removal of 250,000 tons of rocks and the time of 100 years to complete this temple complex. Kailasa temple at Ellora has four parts. This includes a central shrine, the entrance gate, a temple dedicated to Nandi and an array of five temples surrounding the courtyard.

Kailash temple at Ellora caves Aurangabad is an awe-gasping edifice that will definitely make your jaw drop. Don’t believe us? Well then, there is only one way to find out. 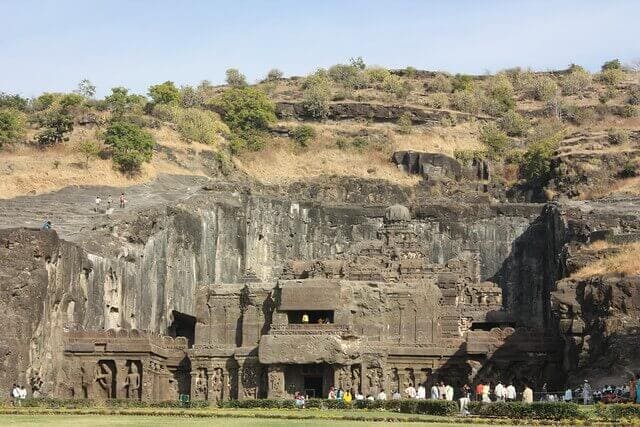 When to visit Ellora Caves in India?

Now that you have every piece of information on this magnificent puzzle called Ellora Temples, it’s time to actually pay it a visit. Wait! You know what’s the best month to visit this plush sanctuary right? No? Well, then it’s the pleasant months of monsoon and winter for your holiday in Maharashtra. Thank us later!

Unlike Ajanta Caves, Ellora caves are just 30 kilometres away from the city of Aurangabad. Furthermore, if you wish to travel here after your visit to Ajanta Caves, then, you will have to make a 50 km journey.

Are you thinking about the best commute to get there? Then, let us render you with some basic information on Ajanta Ellora temple:

1. In every 30 minutes, a bus leaves for Ellora Caves from Aurangabad Central Bus Station (One that’s next to Siddharth Garden) between 5 am to 9 pm.

2. Public transport will actually cost you nothing. Plus, you will reach your destination in 1.5 hours.

Note: There are multiple bus routes. Some will drop you at the cave site and some will leave you at the entrance of a village from where you will have to walk or take a rickshaw ride. So, make sure you ask the bus driver beforehand.

Travelling here from Mumbai? Then, get ready for a 400 km long Indian road trip. You can reach here directly by all the other means too. They are:

Starting point: The shuttle bus will drop you directly in front of cave 16. So, that will be your starting point.

What are the Ellora Caves timings and days?

Opening days: Every day except Tuesdays.

Ellora Caves Timings: 6 am to 6 pm

*Top tip: Trying visiting these caves during weekdays to avoid the crowd.

What are the charges to visit Ellora Caves Aurangabad?

For the number of amazing pointers on your travel journal, the entry fee for Ellora Caves in Aurangabad is nothing. Still, if you want to know, here is everything about the tickets to Ellora caves.

Entry fee for children under the age of 15

Note: Do you want to save yourself from the entire planning facade? Then, we suggest that you plan your cave jaunt in India with a trustworthy travel agency. So, why not plan this and many other South India tours along with Maharashtra adventures to live your India travel dream. Yes? Then give The Grand Indian Route a chance to be there at your disposal. Believe us; we will have your back. So, why not request a quote, eh? 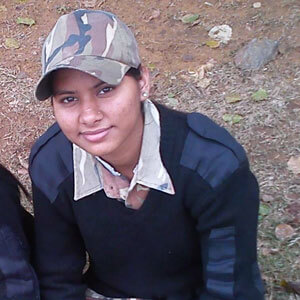 A writer by profession, a humanitarian by nature, and an Indian by heart. She is a foreign language graduate fuelled by an indomitable passion for writing and researching.

Top Places to Visit Near Udaipur- Destinations around Udaipur |TGIR

THE MYSTICAL WORLD OF AJANTA CAVES –A GUIDE| TGIR