Picture yourself in a large expanse of forest, surrounded by the growls and roars of the mighty tigers and lions. While on another side the pleasant and unending chirping of the birds. All this coupled with occasional water streams and waterfalls on your way. What else would one need more than this?

And all this while you take a ride in the open top jeeps with the fierce lions and tigers walking past your vehicle casually. Or just jump up on the top of an elephant for safari and it’s surely gonna get you excited.

The diversity of wildlife in India is unfathomable. It starts with listening to the hisses of venomous snakes and running of streams of water in the forests. And, at the same time, it can take you to a waterless expanse of sand dunes, on the top of a camel. If these animals alone can’t convince you enough to visit the wildlife in India, then there’s more. The never-before-seen collection of rare flora and the magical colors are sure to catch you by surprise.

Still wondering where and why you need to take wildlife tours to India?
Well, let us help with some guidance.
So here are the 7 wildlife destinations that you just are not supposed to miss in India! 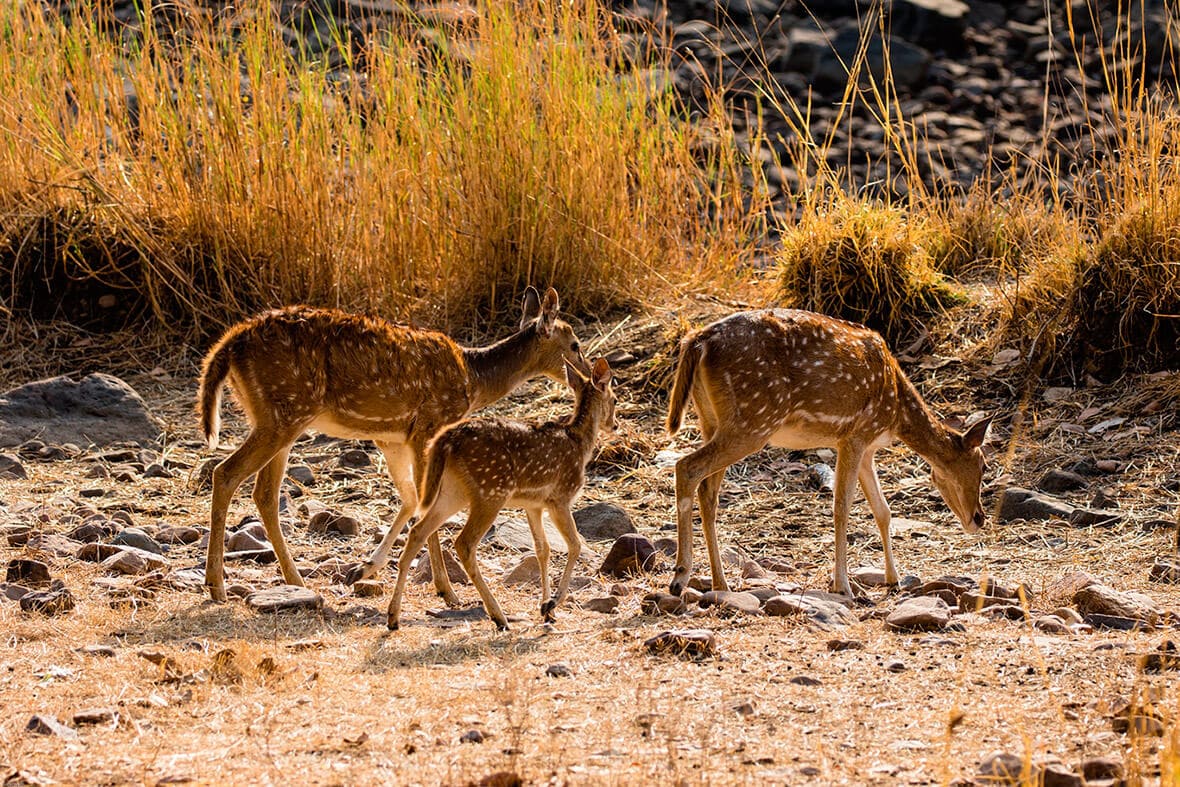 Want to see how exactly is wildlife in India like? Well, then this is the right place for you to be in. Ranthambore National Park! Once upon a time a large hunting reserve for the royal family, Ranthambore is now one of the best-known wilderness areas. It offers staggering views because of its perfect location in the heart of Aravallis and Vindhya ranges.

If you’ve been waiting to sight the national animal of the country, then you are at the right place. It offers the best chances of sighting tigers in the wild. Apart from the tiger, one can also spot sloth bears, leopards, jackals and hyenas here. Along with the wildlife, it also offers a stunning view of the ruins of Ranthambore Fort. Also, the stunning view from the top of the fort isn’t something you’d like to miss.

If you’re visiting the Pink city, Jaipur, on your then this is the most ideal getaway to spend an entire day. Furthermore, there is a lake, Padam Talao which is totally worth visiting. As a result, Ranthambore ranks as one of the best places offering wildlife in India. Any shutterbugs in the house?! So to please all your cameras, the forest reserve offers some of the rarest varieties of flora and fauna.

Can’t wait to get here? Stop thinking and start wildlife bag packing! The royal tigers can’t wait to see you! 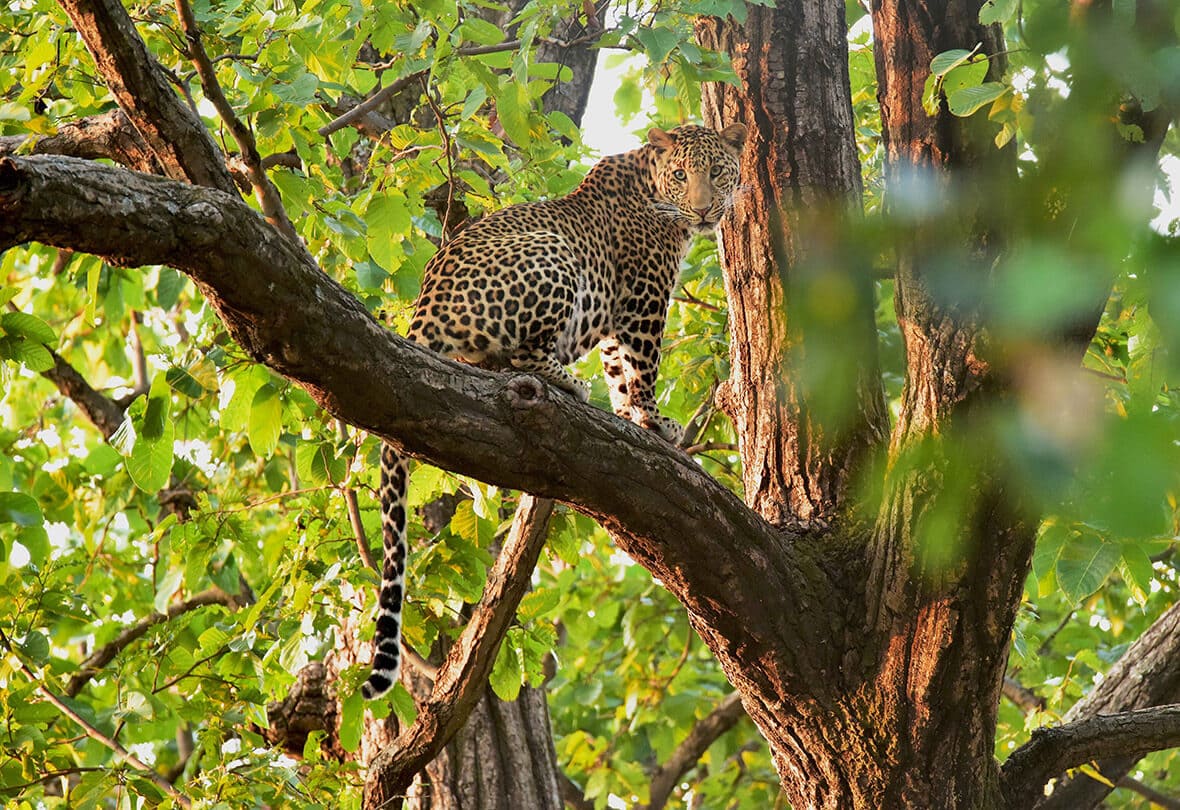 Fancying your chances to spot a white tiger? Then this is the place to do it! Bandhavgarh National park is located in the central part of India. It provides a perfect chance to sight the white tigers and the langurs as well. Want to make the experience much more memorable?

So you might be thinking what’s so special about this park? Do you need more reasons to visit this national park? Most noteworthy fact is that it has one of the highest density of tiger population in the country. Along with tigers, you can also spot a huge range of migratory birds and reptiles here.

Doesn’t this still convince you about the rich wildlife in India? If not, then probably the view from the Bandhavgarh fort and the strikingly beautiful landscapes will surely win your heart.

Also once you’re here, don’t miss out on the famous Khajuraho temple with wildlife.

Watch out for those royal tigers!
They are literally everywhere! 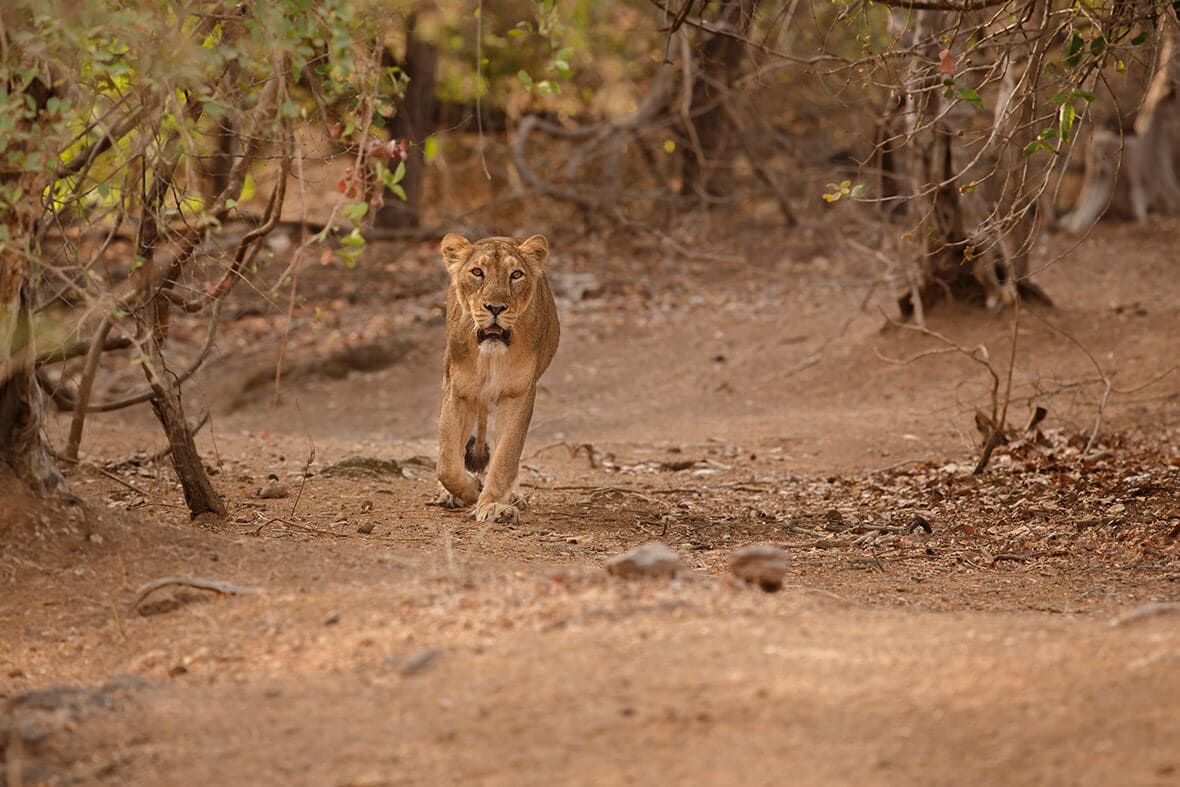 So wouldn’t you want to meet the fierce leaders of the wildlife in India?
Want to set-up a date with the King of the jungle?

Thrilled to witness the might of the King in his own kingdom?
Then rush to Gir National Park in Gujarat!

Best known for its Asiatic lions, this national park enjoys a rare privilege. Apparently, it’s the only park in the world where one can spot Asiatic lions. This exclusive privilege just transforms the kind of experience that wildlife in India brings with it.

Also, the Gujarat tourism is synonymous with the Gir Lions. If you want to really enjoy an exciting lion safari, then you got to head straight to Gir. Get on a safari and snap yourself in a close-up selfie with the king of the jungle.

The King of the jungle literally makes his presence felt here, with his fiery antics. Already feeling intimidated? Well, just to make you feel comfortable, you’ll also find striped hyenas and other smaller carnivores like jackals and leopards.

Wait! That’s not all!
There’s also apparently an unfenced area outside the fenced portion of the national park. This unfenced area, called as the Gir Jungle Trail, is home to a number of pythons, categories, and vultures.

Has this got your adrenaline rushing?
What are you waiting for then?! The Gir lions can’t wait any longer! 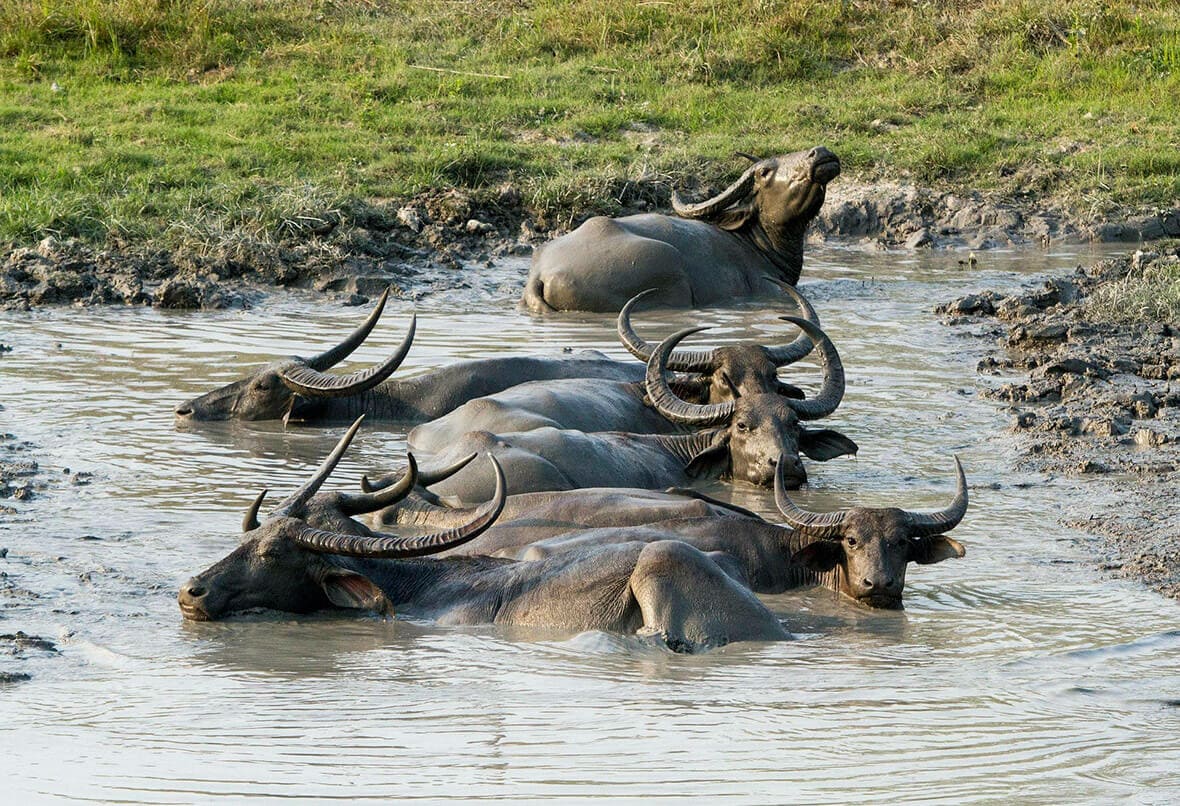 One-horned Rhinos anyone? No, we are not kidding!
Neither are we talking about the Jurassic-park.

Oh yes! One-horned Rhinos do exist for real as a part of wildlife in India. Can’t believe? Well, then a trip to Kaziranga National Park is almost due!

Spanning across a wide expanse of land, Kaziranga is home to a large population of one-horned Rhinos. It accounts for almost 2/3rd of the entire one-horned rhino population across the world. Adding yet another feather to its hat, it’s also a UNESCO World Heritage Site. Ironical but true that the reason for the flourishing wildlife in this place is due to its isolation from human inhabitance.

Should we tell you something very interesting about this park?

More than for the various flora and fauna present here, the park is more reputed for its conservation programs. Cool, ain’t it? Along with the one-horned Rhinos, it did a great job conservating the Tigers too. Hence it’s declared as a Tiger reserve as well. Along with the Rhinos and Tigers, there are a lot of migratory birds here to tell you a Hi!

Wait! It’s just not the animals and birds here but the unique aquatic flora too which won’t cease to amaze you. The congregation of rivers and ponds here complement the wildlife perfectly.

And if all this doesn’t make you want to explore the wildlife in India then we don’t know what will! 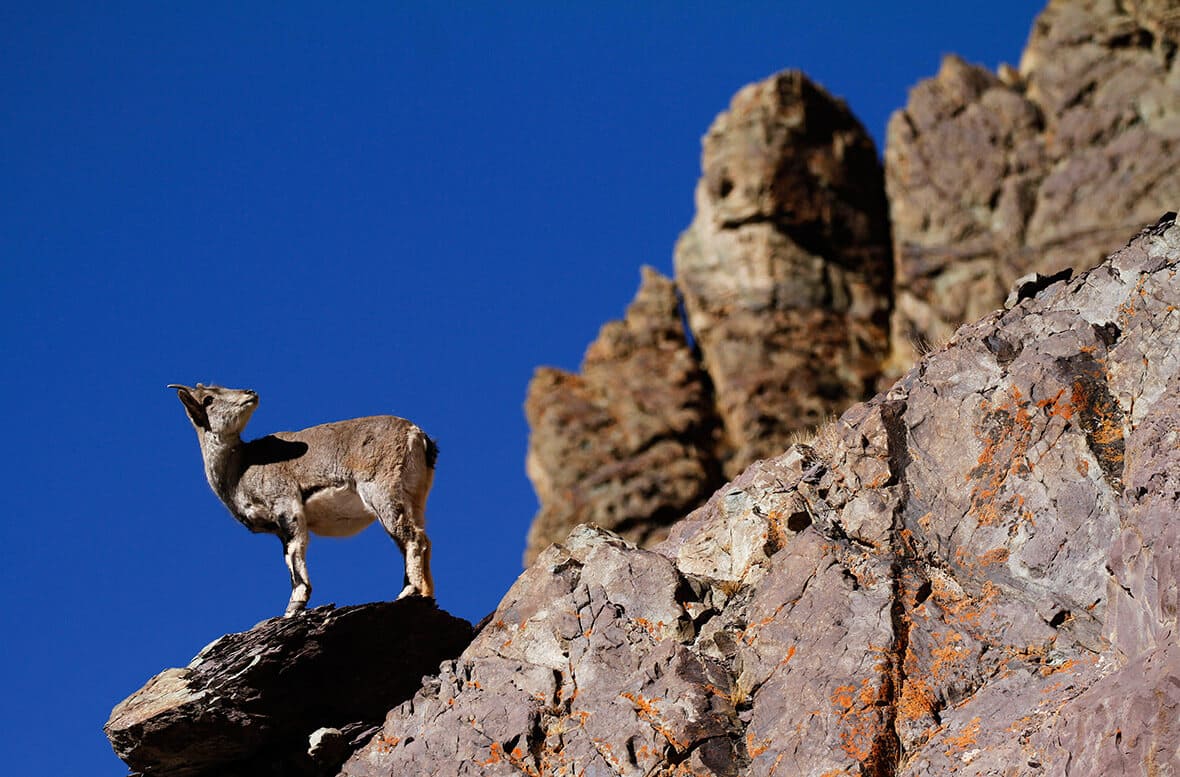 Want some high altitude adrenaline rush? Want to sight yet another endangered species in the northernmost wildlife in India?

The Hemis National Park in Ladakh is home to as many as 100 endangered snow leopards. Oh yes! There are chances that you might end up spotting one of these snow leopards. Take out your snow gears and head to the largest national park to the north of Himalayas! There are other animals like Tibetan wolf, Shapu (wild sheep), Asiatic Ibex, mountain weasel and red fox to spot too.

The park is bound by landscapes all around thanks to the envelope of mountains and rivers surrounding it. Hemis is surrounded by the bank of Indus River in the North and a few parts of Zanskar range. There are also numerous Tibetan Gompas within the boundaries of the national park.

Places like these have pretty much been striving in conserving the wildlife in India. This park has been serving as a home to many endangered species. These rare species, flora, and fauna are sure to bemuse you.

So are you set to go out exploring for the snow leopard!
Stay on your guard and keep your camera lens ready!

It’s gonna be a blink-and-miss situation in case you spot one. 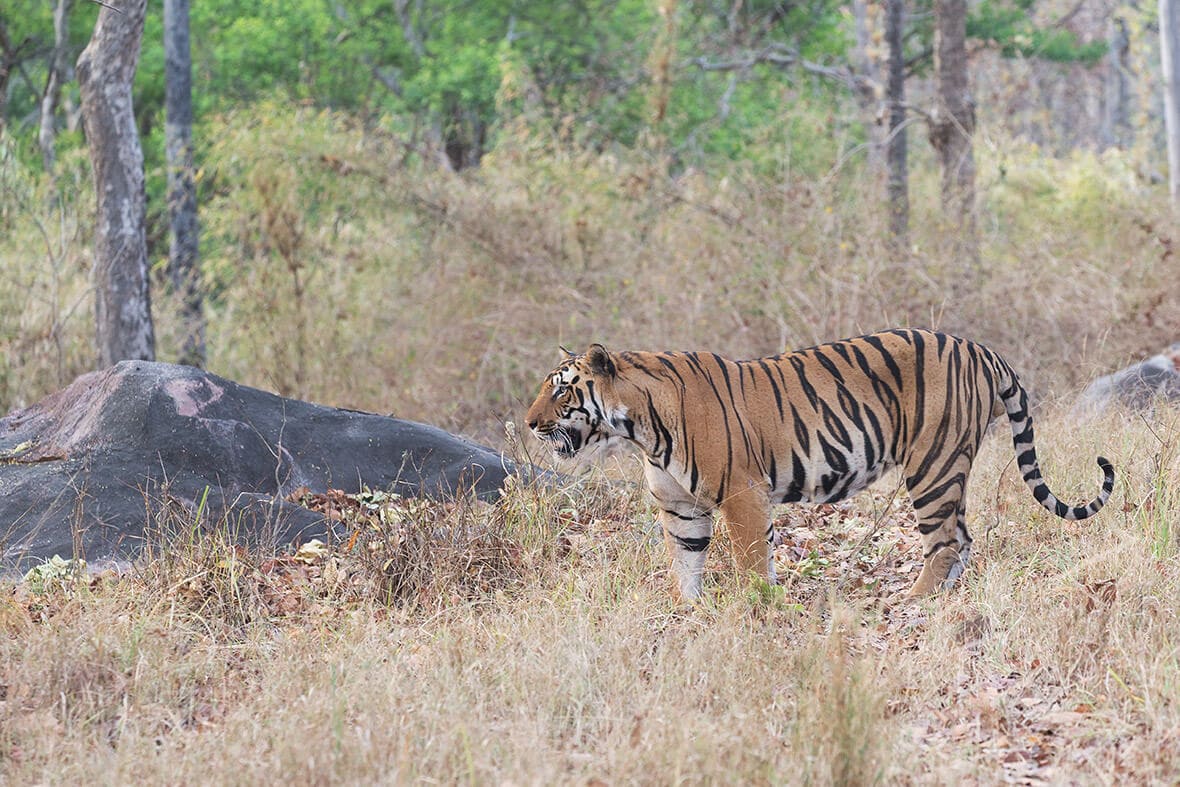 Fancy some memories from the bed-time childhood stories?

Stories of Mowgli and the Jungle Book?
Apparently, the movie ‘Jungle Book’ is based on the jungles and various other wildlife in India.
Have a special appreciation for the varied plants around? Then, this reserve has got about 1000 variety of plants and flowers. Also, this is the first such national park which has set a mascot.

The endangered species of Barasingha is its mascot. Also, one can spot grey hornbill and other species of migratory birds here. It also successfully reintroduced barasingha and conserved them.

As said earlier, you can go on a virtual ride through the ‘Jungle Book’. It’s an ideal place to spot black panthers, pythons, elephants, and bears. So are you ready to live the ‘Jungle Book’ experience of the wildlife in India? 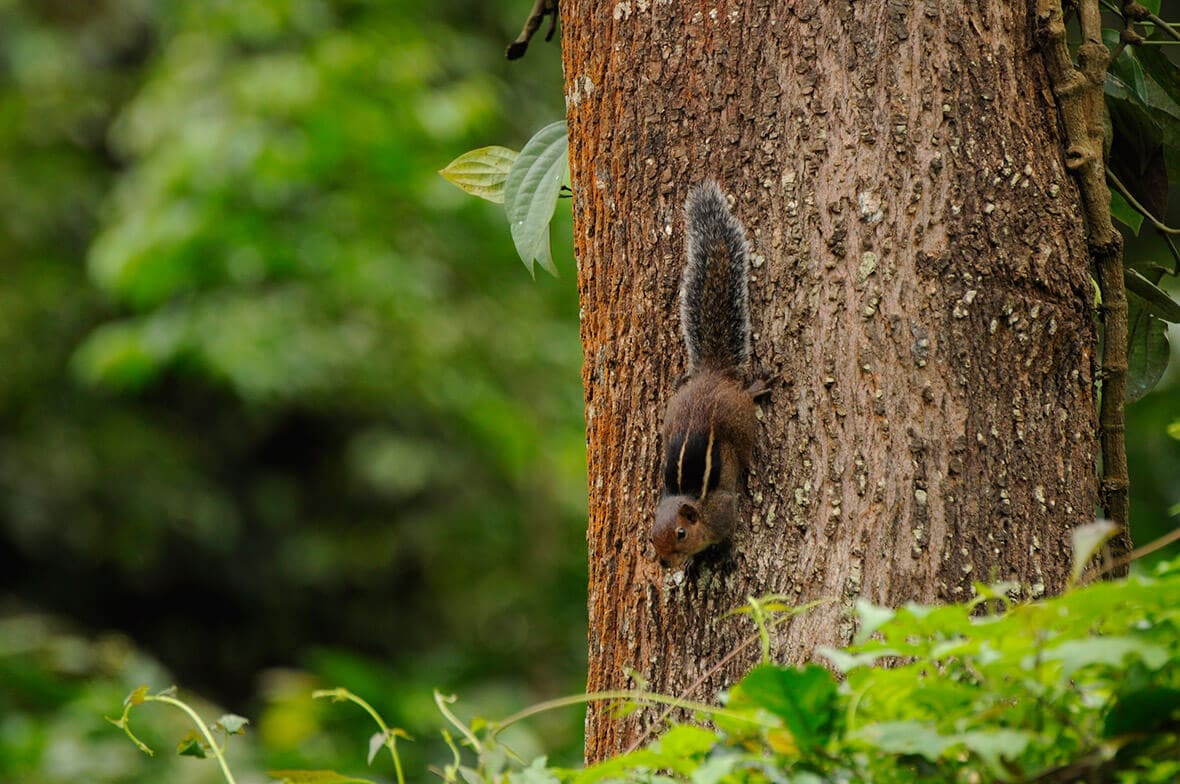 Want to see the animals up close?
Want to boat around on the lake in between the park?

Get set to explore the sanctuary and spot the wildlife in India, in an altogether different way. Periyar wildlife sanctuary is a perfect place for all the nature lovers. It is filled with lush green slopes and landscapes. Also, the park is perched on top of hills making it a visual treat for the onlookers.

The wildlife sanctuary is also home to the famous Nilgiri langur and Nilgiri Tahr. Both for photographers and tourists alike, this place would be a paradise.

Elephant safari is one of the main attractions in the sanctuary because of the presence of the wild elephants. Also, the sanctuary submerges a 100-year-old lake, which pretty much meets the basic needs of the inhabitants. One can boat around the park, on the lake, to watch the animals like the elephant in close-up. This provides an excellent view of the animals in an altogether different way.

One of the must-do things in this sanctuary is to go bamboo-rafting and witness the rich flora and fauna around. The lake, green lush slopes, and the wildlife perfectly create a complete picture. Unlike any other national park, this one offers a very unique experience of sighting the wildlife.

Wildlife in India has been a major contributor to tourism for a long time. It’ll continue to be so, thanks to the rich flora and fauna adding to the beauty of the places. At least until the endangered species that continue to be conserved, you’ll be able to spot these rare species. Witness how the flora and fauna magically add beauty to a barren place.

Still waiting or pondering on the thought of exploring the wildlife in India?
Well, you can just experience what all you would be missing out on, by actually exploring these places. 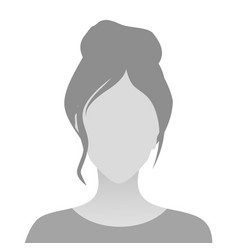 An engineering graduate who decided to follow her passion for writing.

An avid reader who loves traveling and experiencing cultures and traditions in variety. A foodie at heart and a music enthusiast to the soul, she dreams of traveling the world especially Europe for its rich culture and history.

(Also food!) She feels that planning and materializing the best travel plans gives her the satisfaction of seeing people live what she designed for them.

Young and open to learning, she is self-motivated and seeks to achieve greater heights in the field of travel and music journalism. The rawness and the simplicity of the local people of India are what fascinate her. The cultural diversity and a stark variety in Indian social setup compel her to research and write more. 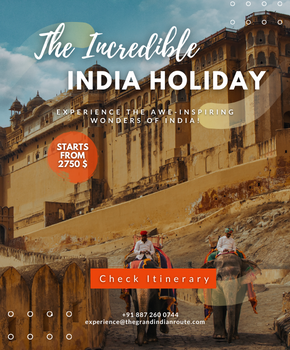