A WALK THROUGH HISTORY: HISTORICAL MONUMENTS IN DELHI

Delhi is a city, a lifestyle and the ultimate urban destination for everything quirky. Frankly, it is the myriad of cultures. It has prominent hues of history shining at the very heart of India. It is the city of the old and the new. And, it gives away graciously what is rightfully its, a great heritage.

Historical monuments in Delhi, in particular, are a treat to every eye. Whether you are in India for adventure tourism, Ayurveda or for that matter even rural tourism, breathing in the best keeps of Mughal Era is always an impalpable delight. Furthermore, who doesn’t like the mojo of history on their holidays in India?

Care to caper in its songs of glory? Yes? Then, hop in on this beautiful display of culture and history of India. Because knowledge of Indian history will be contagious when you are on Delhi trip. Don’t believe us? Then, read about what all is to come your way. We bet even the fort and palace of Rajasthan fall short in terms of the magic it accords. So, fasten your seat belts, maybe? 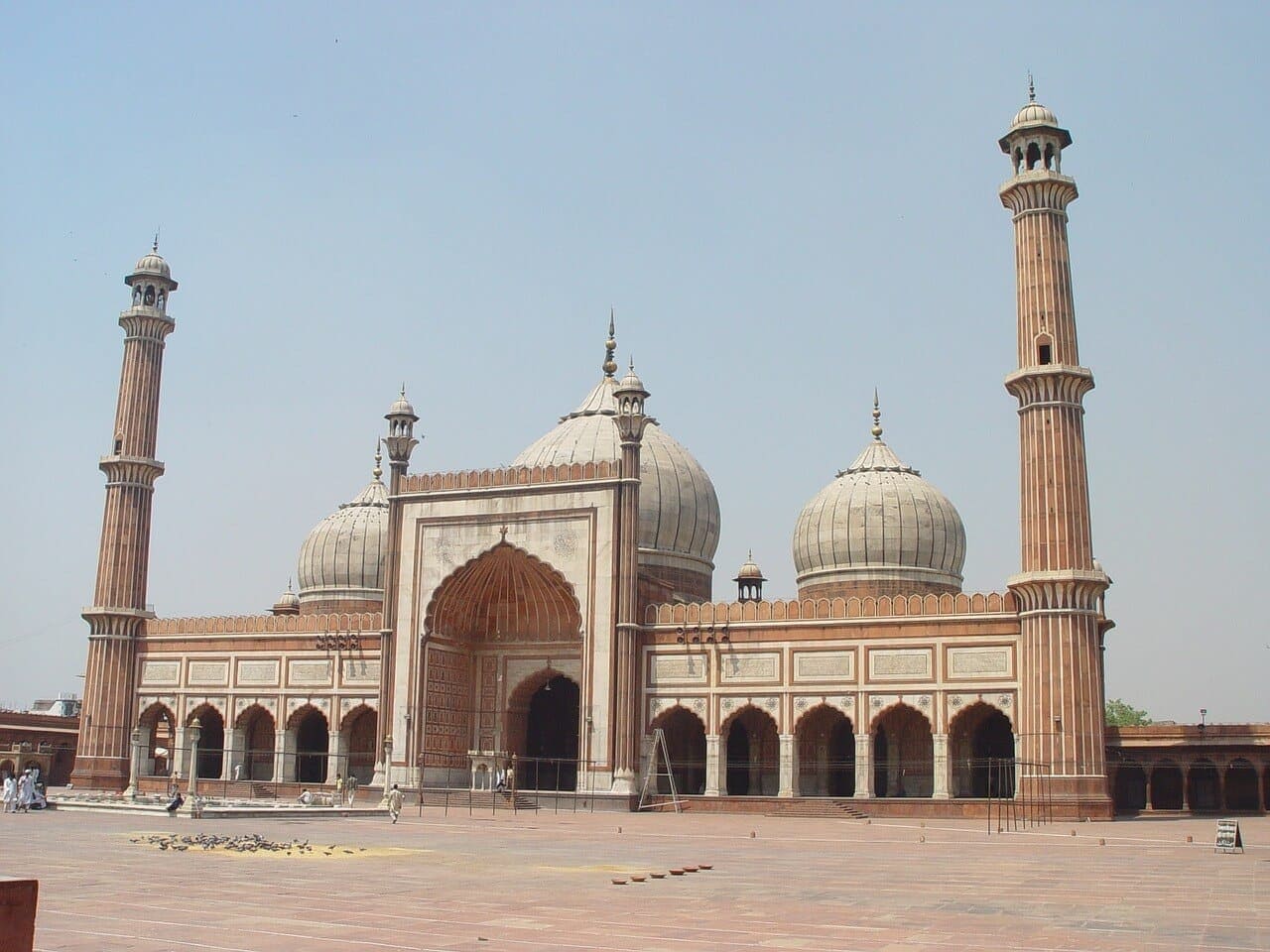 Spirituality is the heart and soul of India. Moreover, when it intertwines with the threads of history, then, its outcome is as beautiful as Jama Masjid in New Delhi. This beauteous million dollar structure is India’s most prized possession. And, we vouch for it as it holds a place in history and World Heritage Site list.

Famous as one of the last structures of Shah Jahan, Jama Masjid is the zion of religiosity. Here, within the red-walled sandstone structure and the ‘World-reflecting Mosque’, you will bloom with the stride of positivity. It is the blaze of calm you need after the hustle and bustle of Old Delhi. Furthermore, making it one of the most amazing travel places in India.

The architecture of Jama Masjid incorporates a symphonic array of red sandstone and white marble stones. Being a revered religious site, this mosque orients in the direction of Muslim pilgrimage Mecca. With a dome tearing the skies and a prayer hall occupying over 25000 pilgrims, Jama Masjid is an assortment in Delhi you didn’t even know you deserve.

*Tourists not allowed during prayer hours* 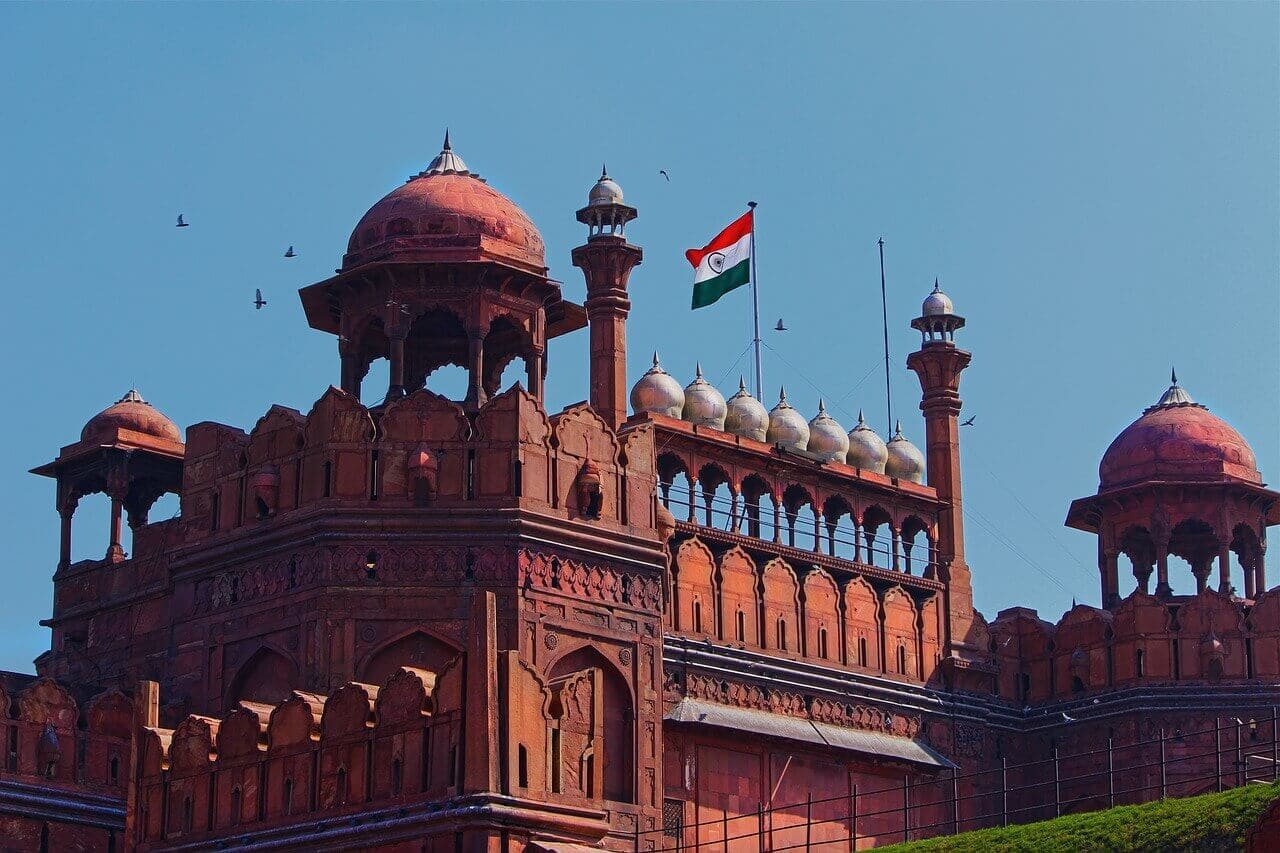 Guarding the realms of ancient India and separating the two contrasting worlds today is our next stop Red Fort. This World Heritage site is one of the top structures to visit in India as it is revered for serving Mughals for over 200 years.

Here are the top places to visit in Red Fort, India: 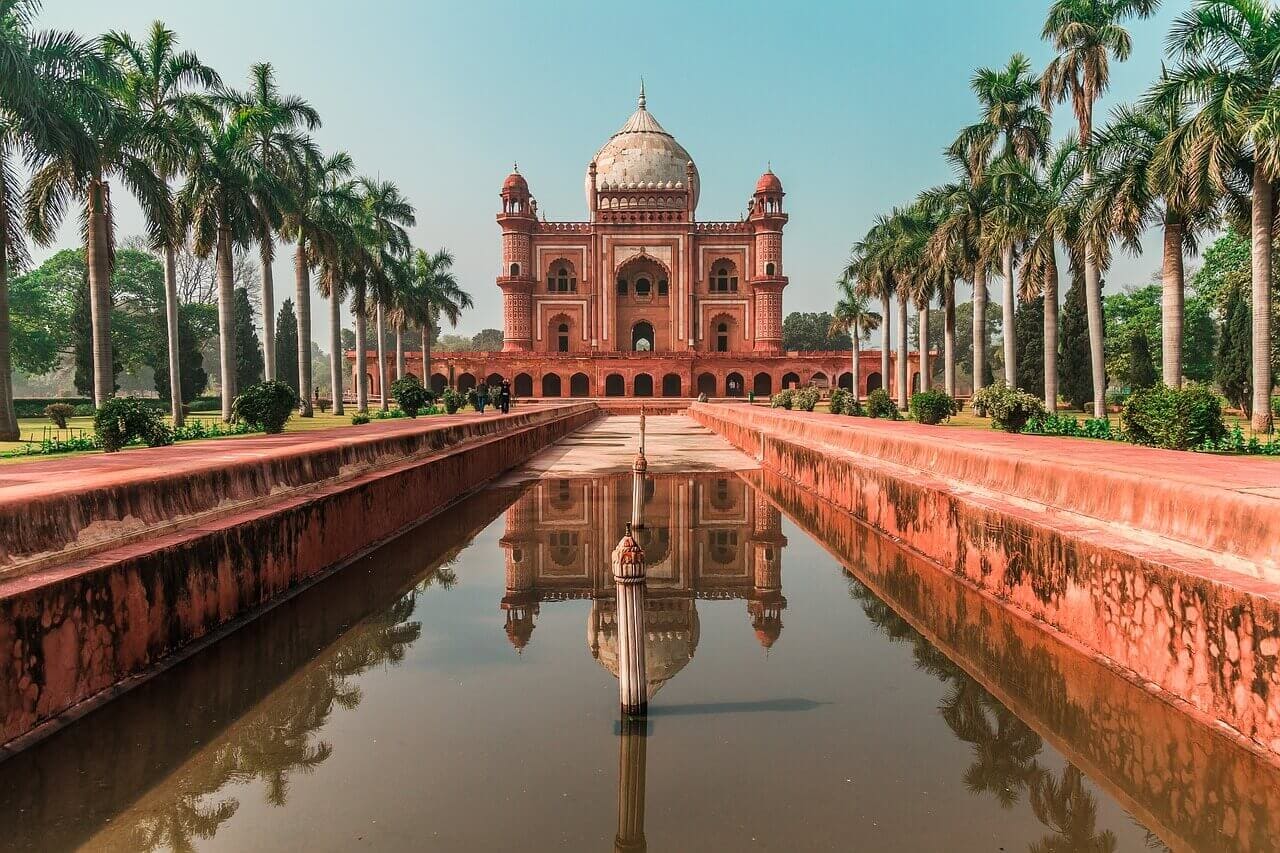 India is decked up in beautiful mausoleum, commissioned in the memory of the great Mughal rulers. The grandest example of which is Taj Mahal – one of the Seven Wonders of the World situated in Agra. But do you want to know from where the trend of larger-than-life mausoleums actually originated? No? Then, make your way to the Humayun’s tomb on your iconic India trip to find the answer to this question.

Besides being a structural marvel, Humayun’s Tomb is the ‘dormitory of the Mughals too. That’s because in its underground cell over 150 plus Mughal family members are buried.

This structure tick marks lots of “firsts”. Apparently, it was the first of its kind to introduce the concept of geometrical gardens too.

Imagine a tint of Persian ecstasy to the beautiful Mughal architectural styles. Isn’t it the perfect recipe for a timeless structural marvel? 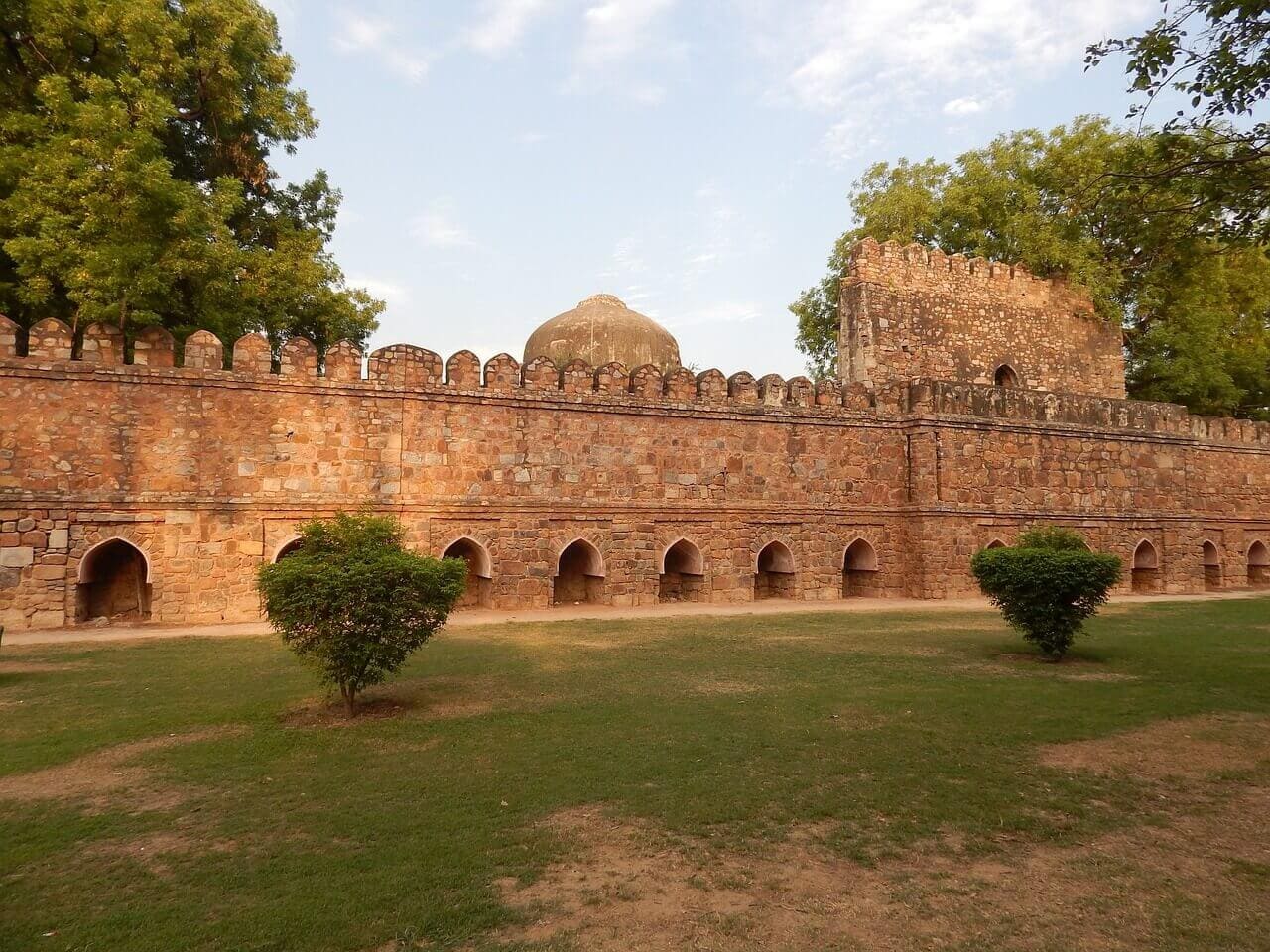 Lodhi Garden or the old Lady Willingdon Park is dotted with stunning monuments of Sayyid and Lodhi Period. Covered in lush green carpets, this historical wonderland in India has much more to accord to its visitors than just being a perfect picnic destination.

Lodhi Gardens stretches to 900-acres in a place like Delhi. Moreover, this isn’t the only amazing thing. Do you know that the complex also has its very own artificial lake and eight-pierced Athpula Bridge from Akbar’s reign?

In Lodhi Gardens, there are beautiful octagonal edifices brilliantly build within its boundaries. Furthermore, making it yet another architectural spectacle on any North India trip. So, what are you still waiting for? Catch its wonderful views on a Golden triangle trip. 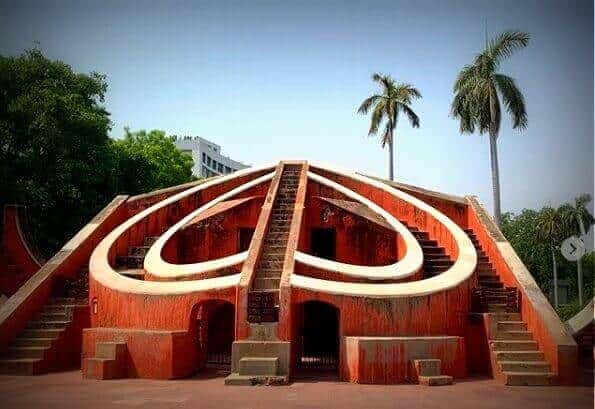 Jantar Mantar is an age-old astronomical observatory created by Raja Man Singh-II. This astonishingly beautiful garden complex sits like complete royalty not so far from the glitz and glamour of the very crowded Connaught Place.

From its very first glimpse, Jantar Mantar is rather simple. Interestingly, when you enter its vicinity, you will be psyched about its large structure like instruments. Furthermore, all the 13 instruments here in this observatory still work. Contrastingly, their precisions are doubtful because of the presence of high-rise buildings around it. So, if you are craving a tang of cosmic science on your India trip. Then, you know where to go. 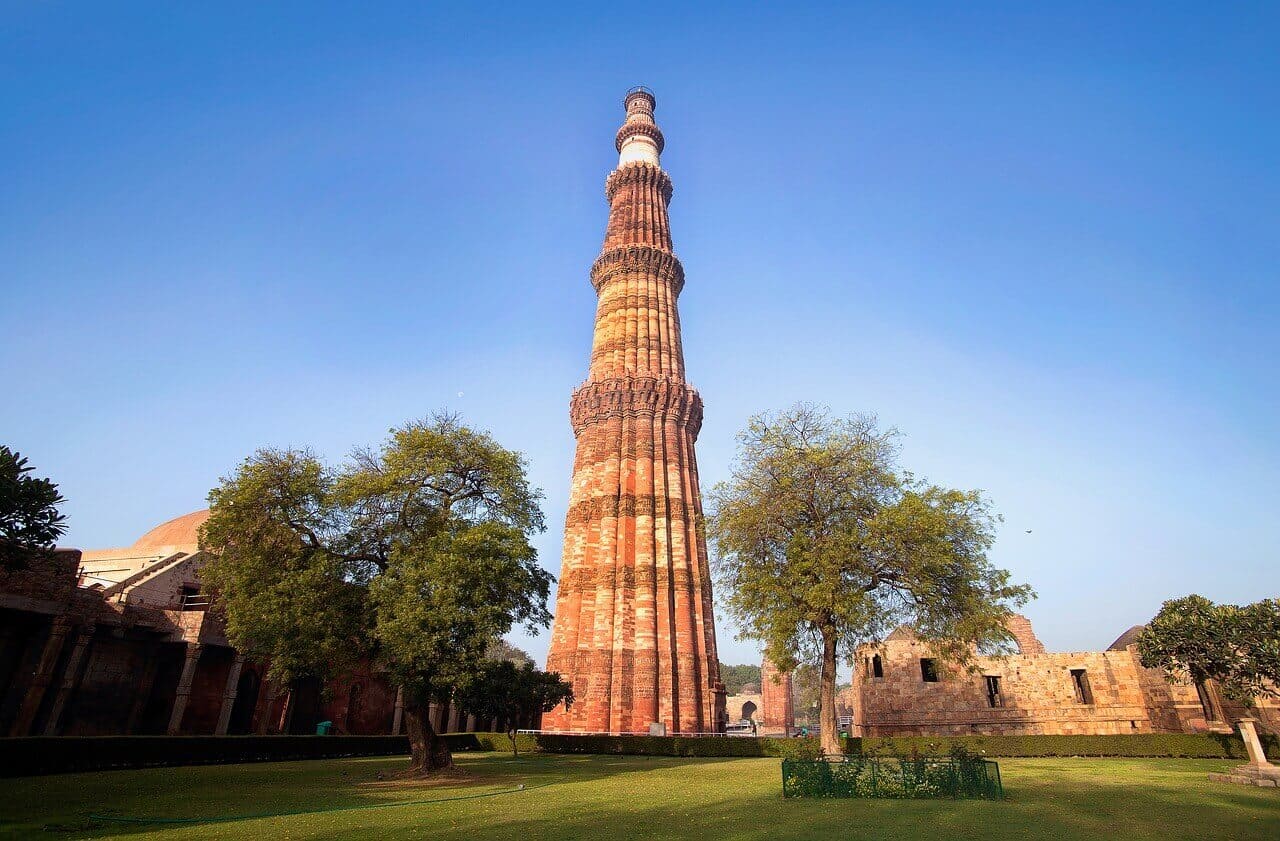 Introducing the concept of skyscrapers since yesteryears are our next historical monuments of Delhi, Qutub Minar.

Holy Moly! It is also the tallest brick minaret in the world.

Welcome to Qutub Minar complex, your personal window into the magical history of India. Here, in the canopy of lush green trees, you will find the most outlandish monument of your Delhi trip.

Tearing the sky at a height of 73 m, Qutub Minar is a symbol of the establishment of Muslim rule in Delhi. However, there have been various debates surrounding the origins of Qutub. Yet all this speculation doesn’t deny the artistic finesse of the structure we see here today in a dun-coloured complex.

The Qutub tower is an amalgamation many cultures. Furthermore, the pinnacle of its finesse is, that these motifs alone can give you a cultural trip to India.

A stroll through its gardens and murals calls out for all the attention in the world. Are you in for that? Then, Qutub Minar will definitely be a great starter on your historical monuments in Delhi itinerary. 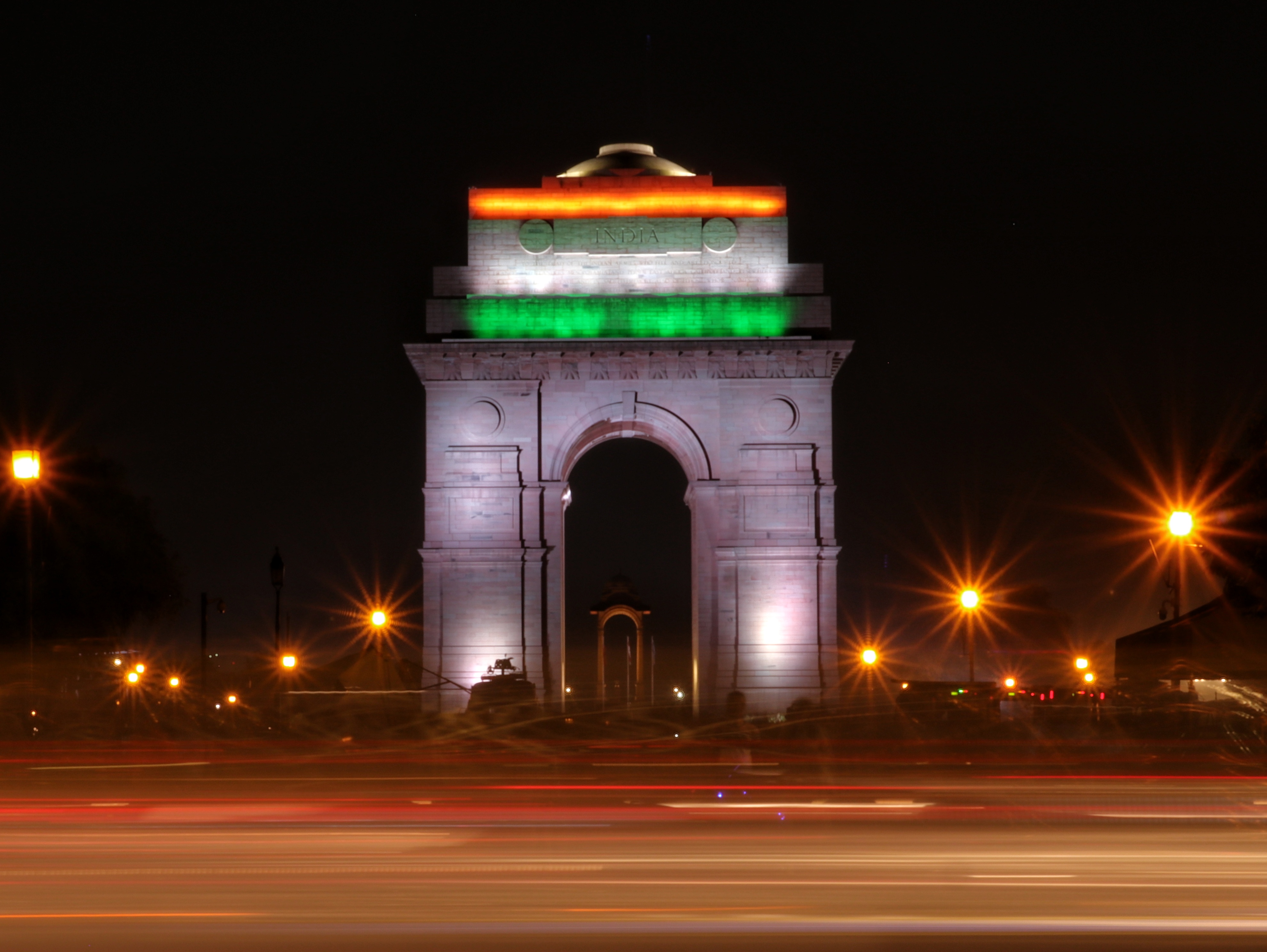 An ode to martyrs of World War!

India gate is a 42 m high archway built in the middle of a crossroad near Rajpath. This humongous structure which was one built to give tribute to the fallen heroes of World War-1 now stands as one of the most popular structures of Delhi.

At dawn, India Gate is flooded with visitors, presenting travelers the taste of India’s most prominent flavor, chaos.

The structure is very grand yet very simple. Furthermore, there is an eternal fire burning in its patronage to add oomph to the whole situation. And, to be honest, it alone is enough to leave you gasping in awe.

It is the perfect marriage of history and verve! That’s because there are stalls, food courts, light shows, photographers and whatnot surrounding this historical monument in Delhi. Do you wish to take its full-fledged advantage? Don’t miss it out on a trip to India. 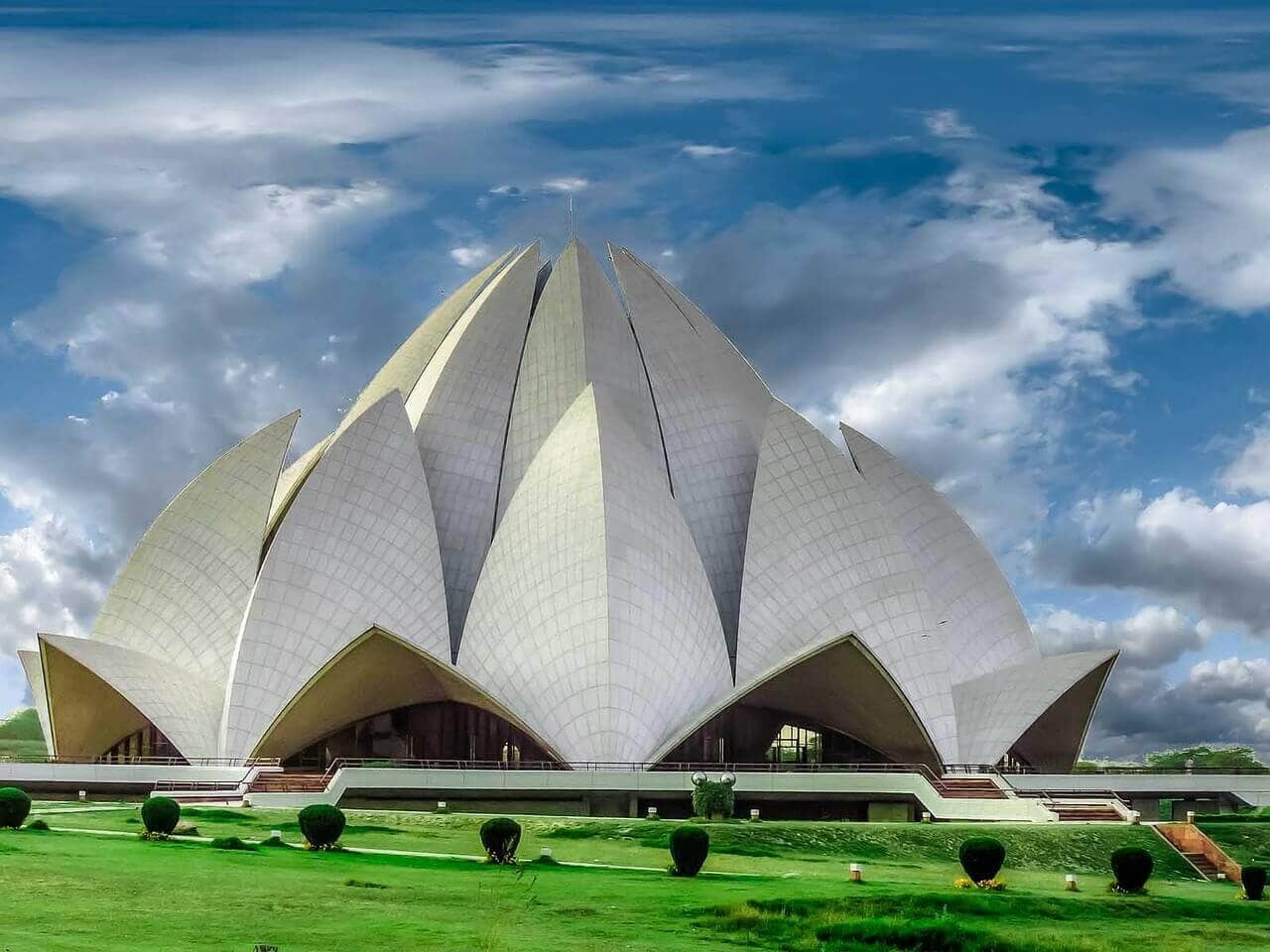 Want to see integrity in high spirits? So, head to Lotus Temple Delhi.

Lotus Temple is the paragon of how religion should be interpreted around the globe, like one entity. Furthermore, it is also famous in the world for its unique construction which make it looks like a lotus.

Are you a fan of architecture? Then, Lotus Temple gives major chills. Furthermore,if you have a knack for spirituality, then its the best place for you. That is why it is one of the top places to visit for a spiritual tour in India.

Are you expecting intricate carvings and wonderful artistic manifestations? Then, hold the horses of your imagination right there! That’s because this structure only houses a meditation room inside that is open for people of any religion. 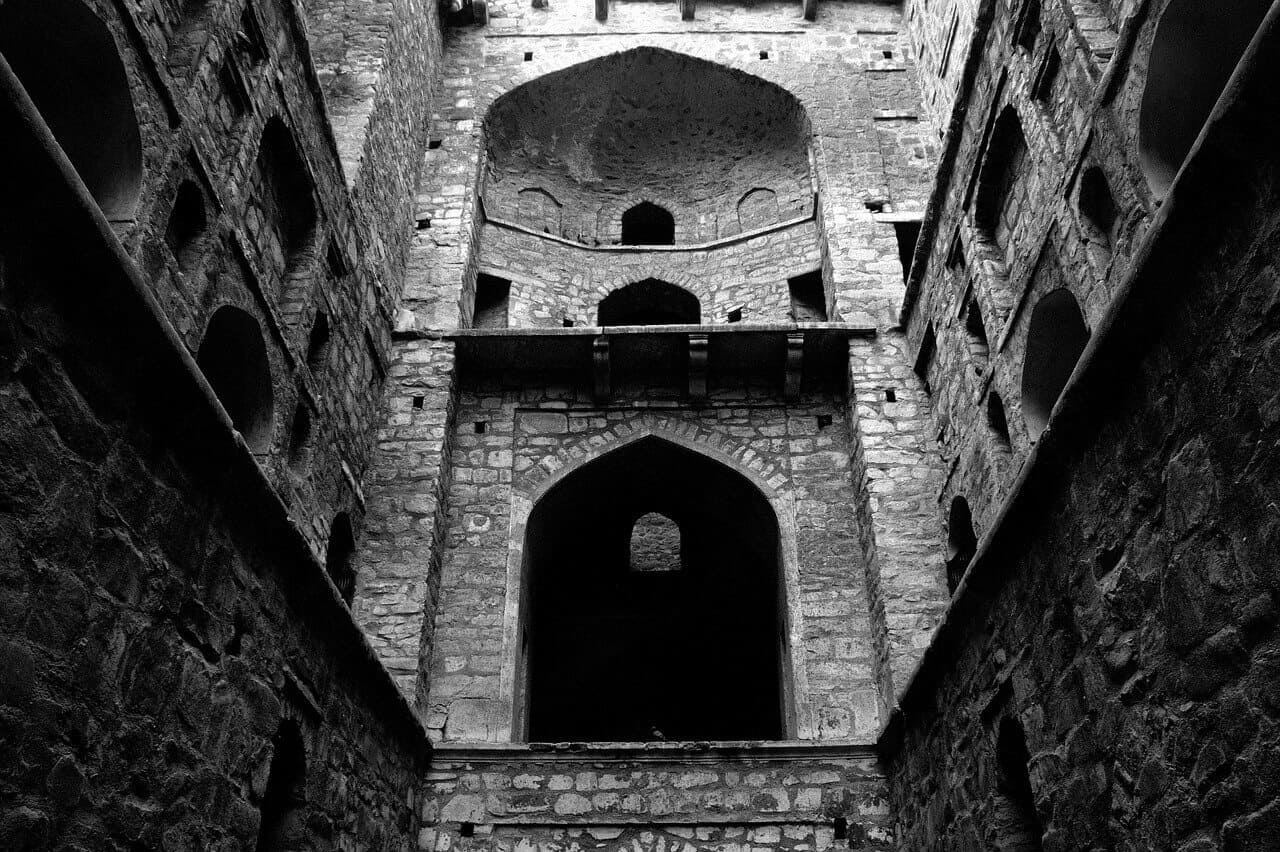 Historical architecture and spooky tales go hand in hand on the travel map of India. So, how can Delhi not have one?

Making its name as one of the top haunted places in India, Agrasen ki Baoli is a stepwell known for its unsettling past. It was abandoned due to lack of water like every other stepwell in India. But, the present day tales of people and even Bollywood stars experiencing goosebumps and even haunting here, made it famous among the masses. Furthermore, according to ancient texts, this stepwell was here since the Vedic times. And, its existence today amid high rise buildings in the area is a miracle in itself.

Complementing its gut-wrenching vibe, you will experience the extravagant expertise of Indian architecture here. Descending towards the heart of stepwell, you will notice many tiny chambers where the kings kept their prisoners.

Also, this 15 m wide and 60 long step-well is the perfect destination for your inner photo fanatic. Believe us; the monochrome in the background of the dun-coloured stones add more magic to every composition. So, make sure you take your lenses there! 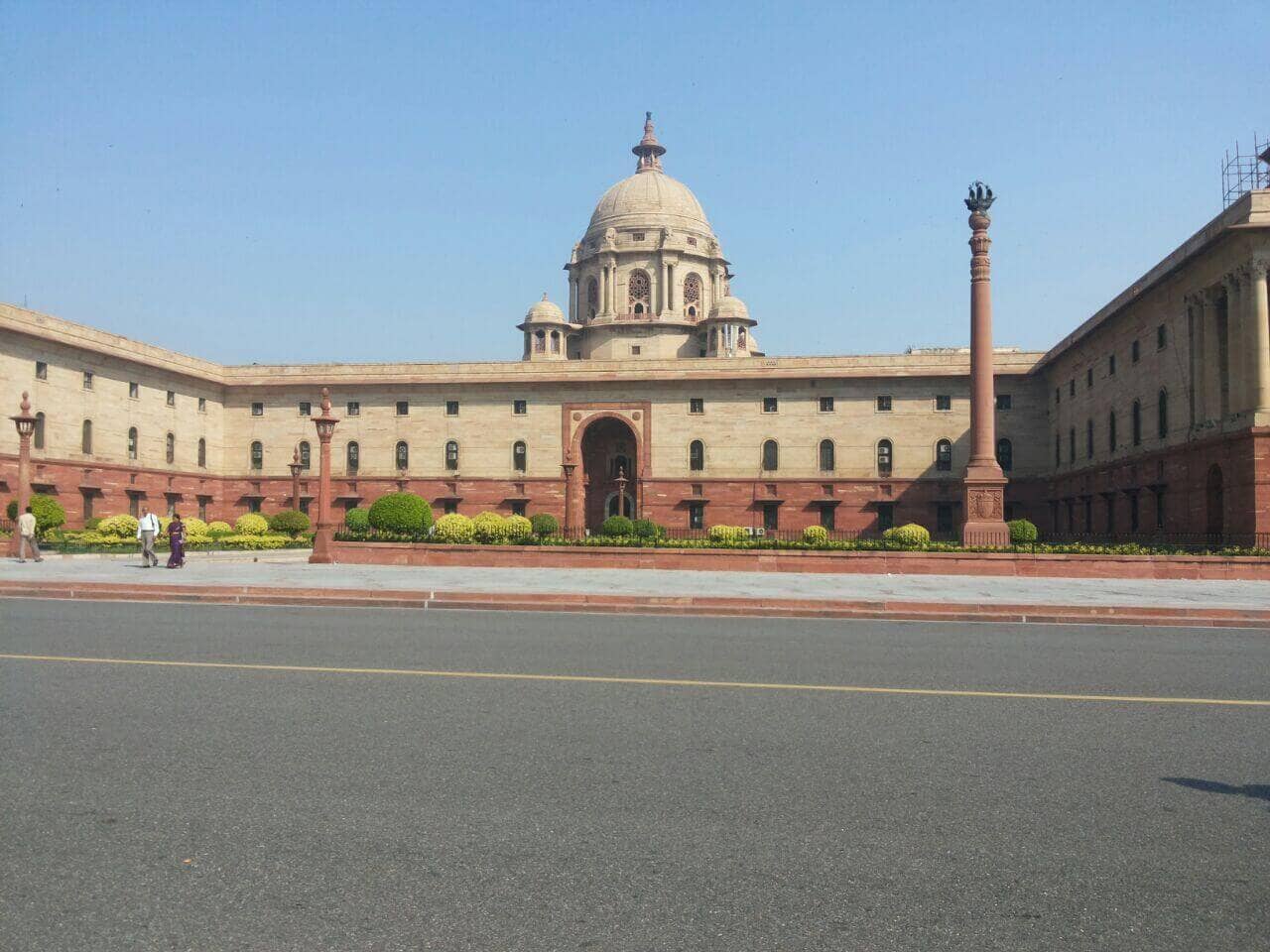 Last but not least we have the most important building of our list, the presidential house of India. Covering an area of 50 acres in a 330-acre complex, Rashtrapati Bhawan is no less than a dream.

When the capital shifted to Delhi from Calcutta in 1911, the edifice was to serve as the Viceroy’s House. Do you want to know a fun fact? This residential complex of the President of India is the largest residence that any head of states ever had in the world. Frankly, with 340 rooms and the humongous area, we saw that coming.

A tour to Rashtrapati Bhawan goes in three circuits. Furthermore, only authorized visitors are allowed to visit the complex in specified time slots. So, only if you are lucky enough, you will be among the few who actually get to see it in person.

The first circuit is that with the Main Building and Central Lawn. It is the first and probably the only circuit where you will be able to enjoy the beauty of this colonial building.

The second circuit revolves around Rashtrapati Bhavan Museum complex. It too has n-numbers of buildings within its boundaries.

The third circuit comprises of the lush green Mughal Gardens. And, it’s probably our favorite one. Why? Well, one, it is decked in beauty, grace and symmetry and second, a tour around it is no less than a feast for the senses. A man of exceptionally impressive management skills. An MBA graduate. He worked for a top German group before he decided to quit following his dreams.

JAIPUR BEYOND PALACES: TOP 12 PLACES TO VISIT IN JAIPUR