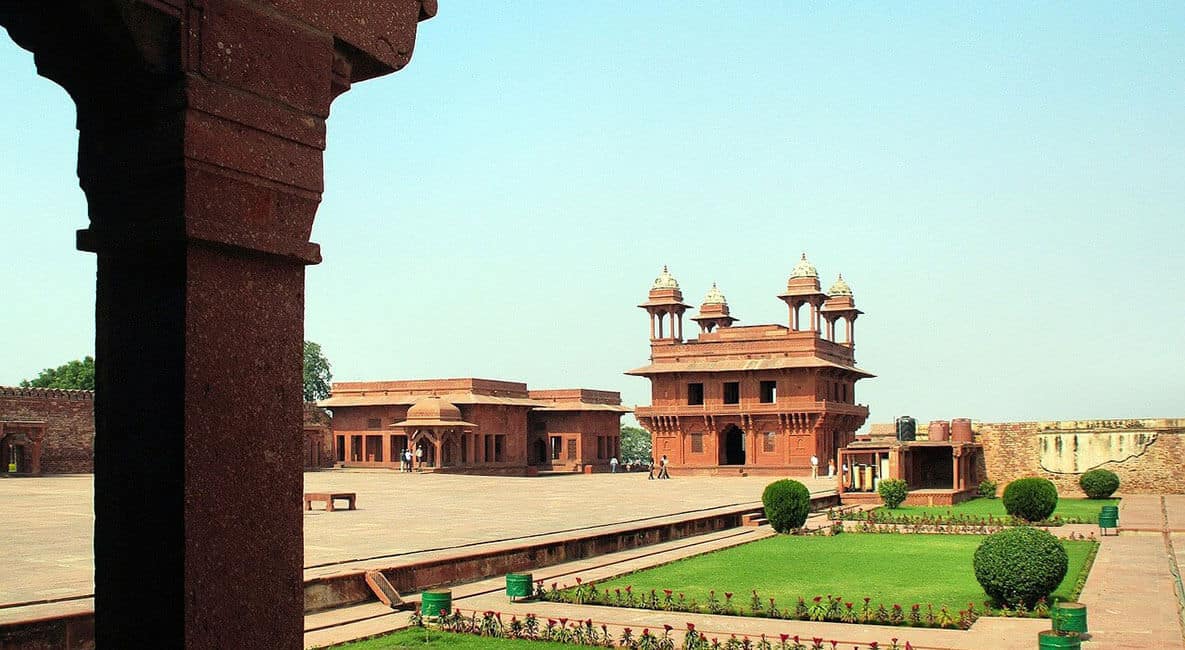 Since time immemorial faith and crown have been the two pillars of every great empire. We have seen its vibrant hues paint the history of the world, one page at a time. India isn’t any different. It too embraced the power of faith while rekindling with the faith in power since the beginning of time. Lucky were those who got the opportunity to witness this amalgamation but it’s never too late!

Pack your bags and head 40 km east of Agra on your Golden Triangle trip or Taj Mahal India tour to witness the mélange that might change your life forever. Here, at this World Heritage Site in India, you will witness the finesse of Indian architecture while traveling leaps and bounds with history. If you think you will require some assistance in exploring this paragon of beauty, then, let us serve you well. We have all the information you need, so read it till the end. 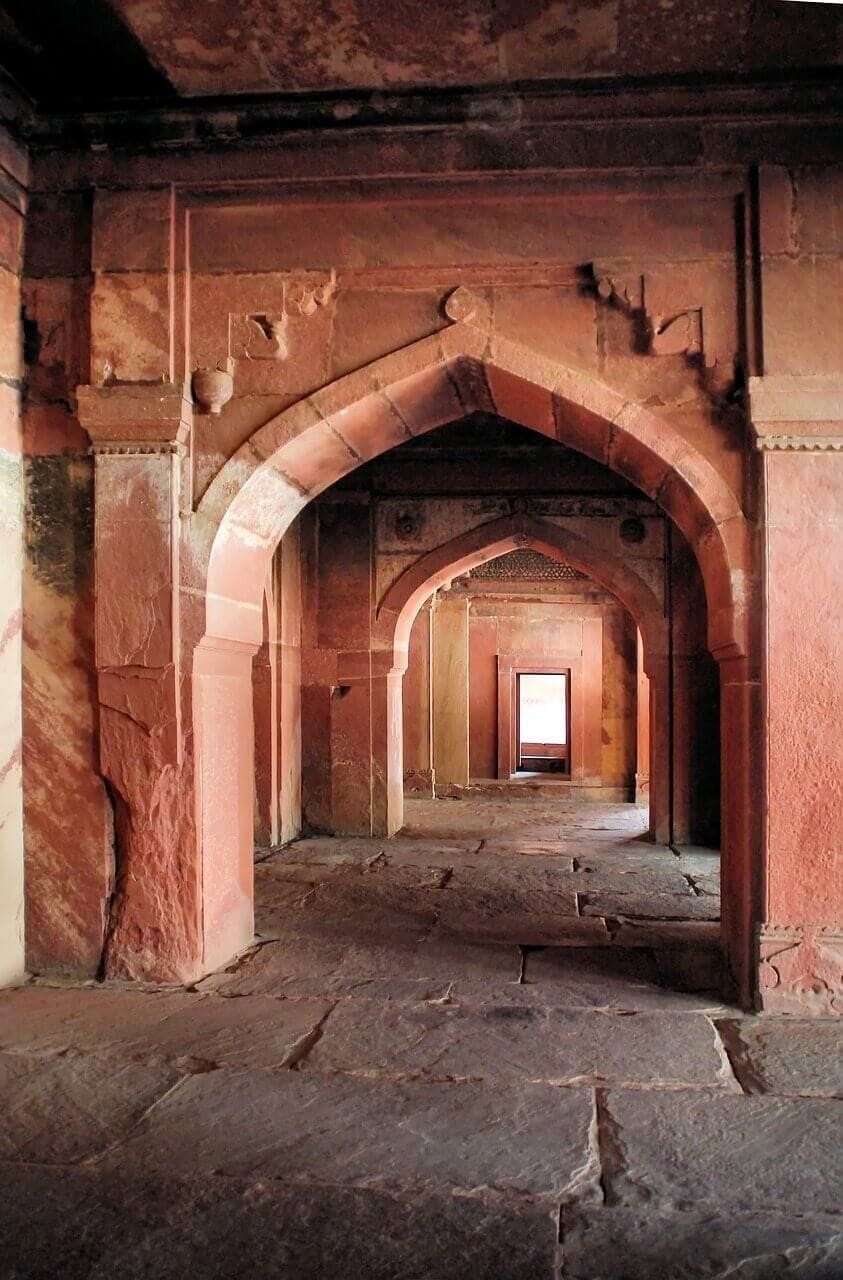 Mughal dynasty has a huge contribution to the history of India. Besides the pristine palaces, lofty forts and finger-licking food, Mughals were also famous for strategically shifting their capitals. The story behind Fatehpur Sikri too involves shifting of the capital but inclined more towards devotion.

Long before its stardom on the travel sky, Fatehpur Sikri was a village. There are mentions of this hamlet in Baburnama, where this place is called ‘Surkhi’ by Babur meaning “thanks”. Why? Well, that is because the lake in the village provided homage to the Mughal army during the war. It was here that Sheikh Salim Chisti (a religious tutor) predicted the birth of a male heir for Akbar which indeed became true in 1569. After the birth of his first child, Akbar built a magnificent structure in Fatehpur and shifted his capital here. Although the days of its glory didn’t last long due to water scarcity, the splendor of this Mughal city is still impalpable. 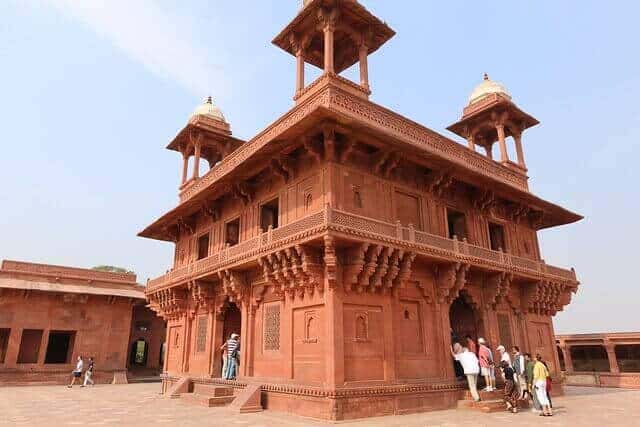 Turn your theist mode on and press your spiritual button like crazy at one of the most revered pilgrim sites of Mughal era. This magnanimous structure in Fatehpur Sikri is painted with every possible tone of red and has prayers resonating across its corridors.

It welcomes the world with a monumental gate, probably the biggest you will ever see. And when you think it cannot get any better, Jama Masjid surprises you with its vibrantly tainted murals and sandalwood canopy.

Here, amidst spiritual immersion, you will find numerous marble screens with red threads wrapped around them. Locals believe that anyone who completes this thread tying ritual with a clean heart is blessed with a male heir.

The tomb of Salim Chisti and his descendants co-exists in this praying hall, adding more meaning to the edifice’s existence. So, if you wish to experience a spiritual awakening on your Golden triangle trip, you know where to go. 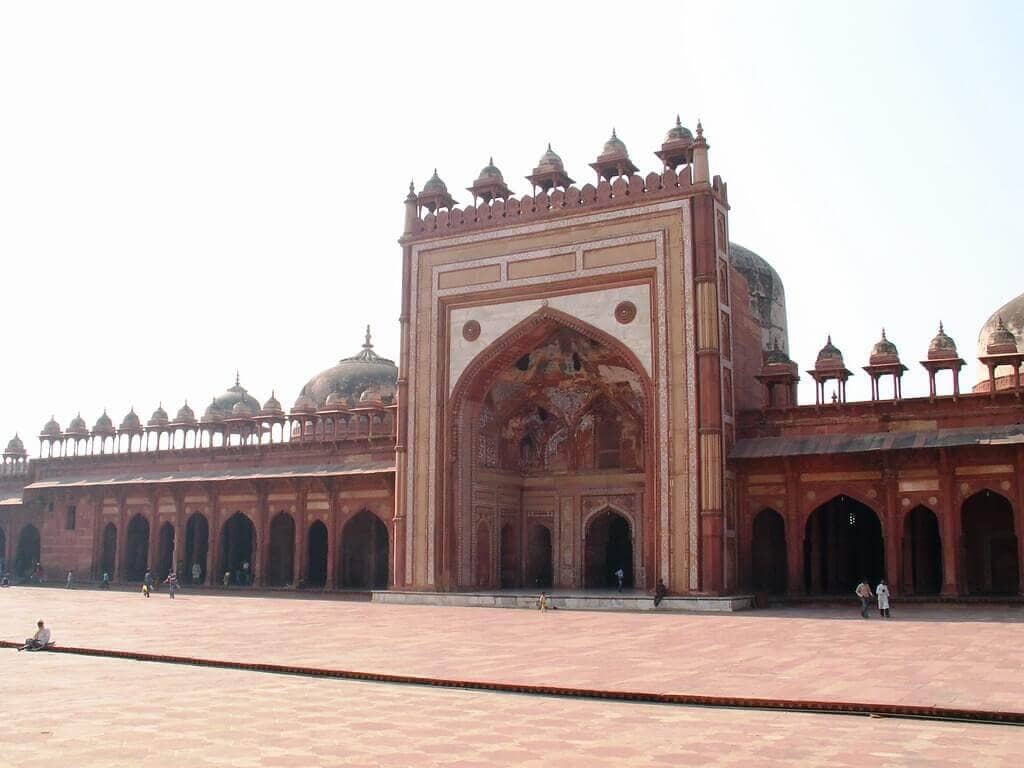 Skyscrapers were the concept of the past. Don’t believe us? Then, head to Buland Darwaza, world’s highest gateway built in the year 1576 at Fatehpur Sikri India. We guarantee that your jaws will drop the moment you will spot it tearing the sky. It’s massive; it’s astounding and decked up in white and black marble, making it yet another charm in Fatehpur Sikri.

Flaunting the best of Mughal architecture, this edifice built with red and buff sandstone marks the entrance to Jama Masjid. Uniquely, you will have to climb 42 steps for reaching this gateway but in the end, it will be worth it.

A 15-story structure that’s over 54 m in height and took almost 12 years to build, even re-reading this is giving us chills, what about you? 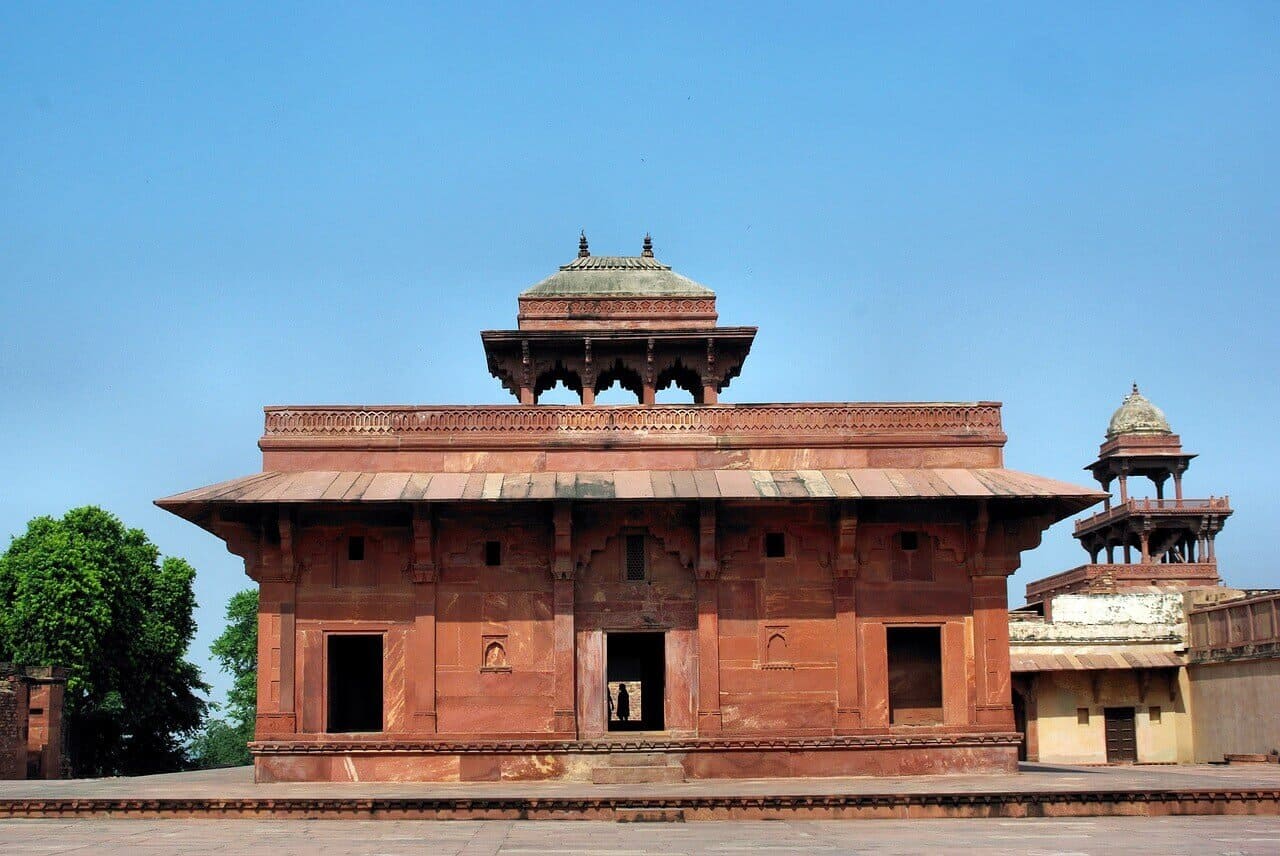 Open the gates of your heart to the supposed pleasure palace to Emperor Akbar. Majorly used for the entertainment of the Emperor, this five-story pavilion stands sturdy on the western side of the Fatehpur Sikri complex.

Unlike the magnanimous palaces in Rajasthan, this palace inside the complex is a Persian wind tower. Originally built for the ladies of the harem, this airy structure is quite a treat for the senses. Its purpose wasn’t only to ensure the safety of women but was also to save them from the uncomfortable summer of the region.

Strolling through its alleyways you will discover the ruins of intricately carved pillars separated by carved screens. It is believed that through these screens the ladies of the court enjoyed the splendor of this fortified city. Besides the Buddhist outlook and floral motifs on every inch of this structure, the number of columns decreases as you ascend every floor. Beauty, grace, and precision are three words that aptly describe this place. So, add it to your places to visit Fatehpur Sikri list now. 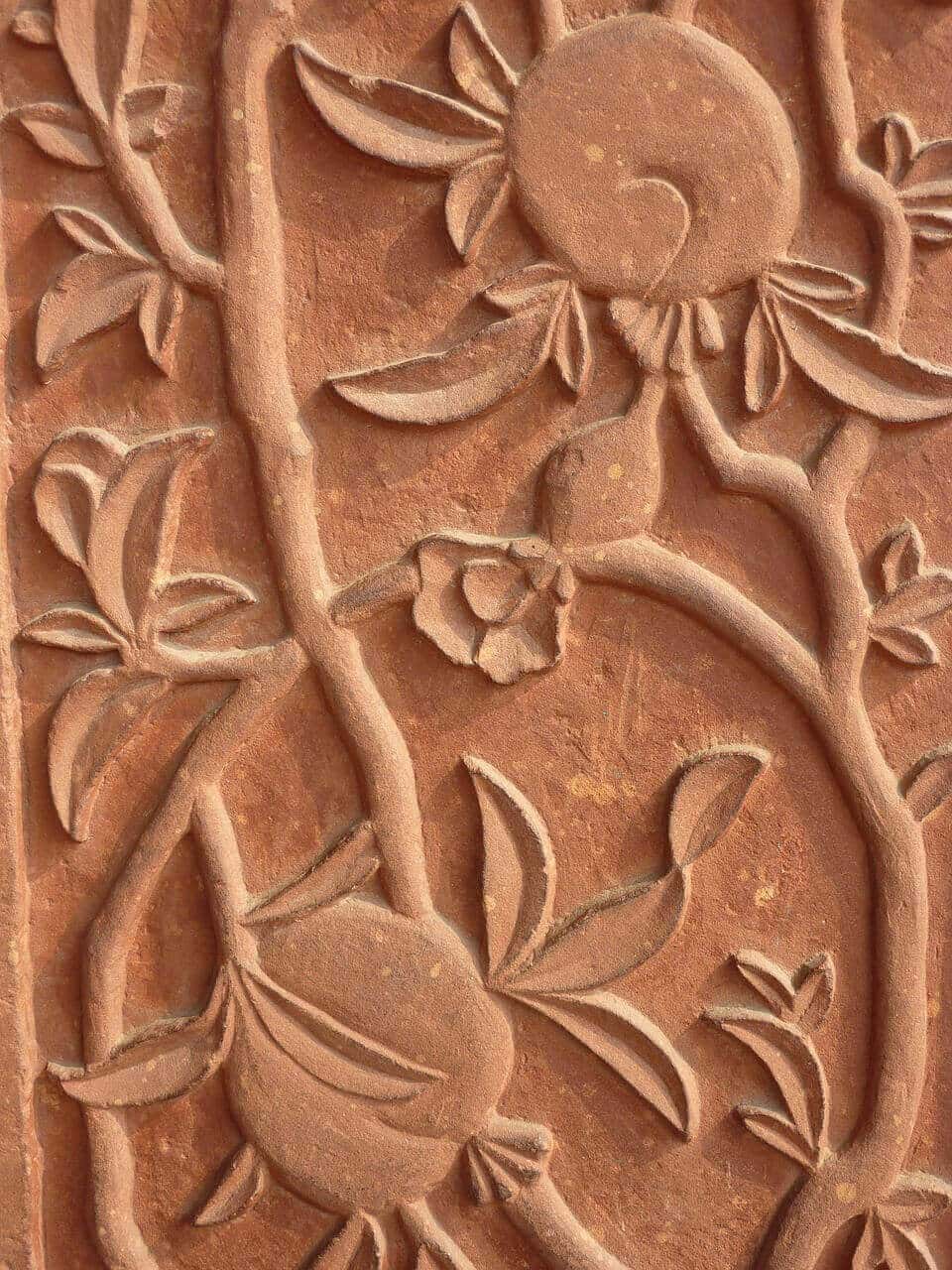 Jodha Bai was the beloved queen of Emperor Akbar. Having said that, witnessing her palace will make you realize how much the emperor loved her. Why? Well, that’s because it’s one of the grandest structures you will see in Fatehpur Sikri. Believe us when we say that the structure was exclusively made for the Rajputana Empress.

Gujarati and Rajasthani architectural patterns adorn her pristine palace. The shape of the palace is straight up rectangular but magnificent gateways and Hindu motifs leave no stone unturned in making it a treat for the eye.

There are beautiful curvilinear pillars with brackets and chhatris graciously sprinkled over the structure to add on to its elegance. As a matter of fact, the palace contains a temple too. Well, it isn’t as grand as other temples in India but its existence is a great deal in itself. Why? Well, because that’s one sight you will rarely see at any other Mughal structure. But hey! Love sees no religion, isn’t it? 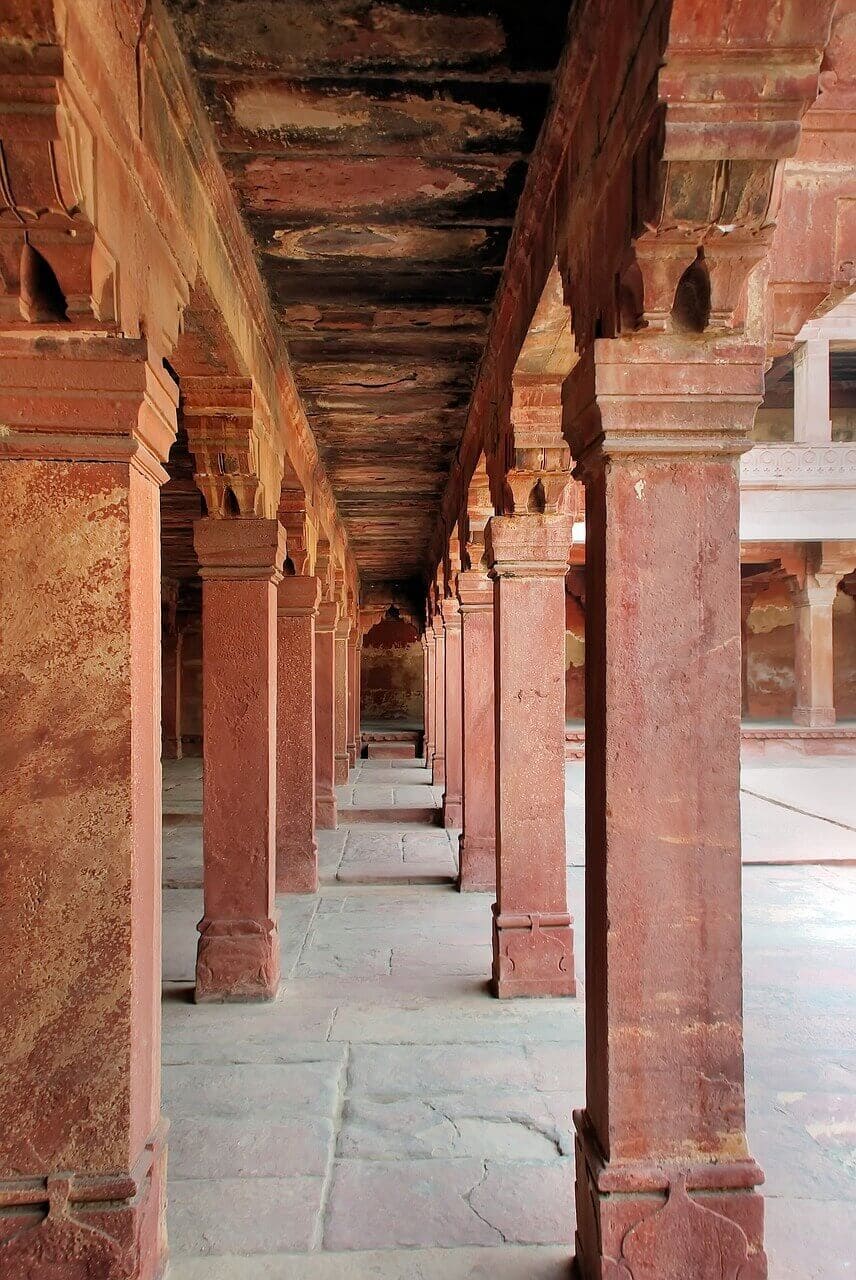 Akbar was an empathetic ruler. Do you want to see its living proof? Then, make your way to Hiran Mahal where Akbar built a huge tower in the loving memory of his elephant. Many historians believe that it was a strategic move as it served as a milepost and also as a lighthouse for night travelers. Well, who are we to question his intentions, right?

The tower today is the perfect spot for budding shutterbugs as it is a great place to catch a birds-eye view of Fatehpur Sikri. Besides that, its construction is so unique that you will take some time to yourself deciding what it actually looks like.

Locals believe that the tower was connected with the palaces and was used as a private watchtower by the queens. We can completely see that coming because of its 22 m high. Intrigued much? Then, there are many more facts waiting for you here.

OTHER NOTEWORTHY CHARMS OF FATEHPUR SIKRI

Plus shaped checkerboard and a whole courtyard to an indoor game which we know today as ludo. Well, that sounds enticing, doesn’t it?

It is the southeast most structure that’s been carved to perfection. No, wonder why it was considered to be the perfect place to relax by the Emperor himself.

Step foot into the treasure trove of this palace-city-complex to have an idea of the riches of the Mughal Empire. So, hold your breath!

Meaning dream house in Urdu this area has concrete summer beds circumscribed by a water pool. Well, that’s the kind of royal privilege you signed for viewing, isn’t it?

Well, you cannot really talk about Akbar without mentioning his clever hand Birbal, isn’t it? Enjoy one of the most beautiful palaces inside the complex. Originally built for Akbar’s queen Rukaiya Begum, the palace has some regal charms that cannot be missed on a Fatehpur Sikri tour.

When to visit Fatehpur Sikri?

October- February: The whimsical alleyways of Fatehpur Sikri paint a background that you can enjoy at any time of the year. If you are a tropical child who is capable of going on traveling sprees in the scorching heat, then, any time of the year will be suitable for you to pay it a visit. Contrastingly, if you think you can’t survive the summer heat strokes, then, the dry, cold months of winter are perfect for you to plan a visit in Fatehpur Sikri.

How to reach Fatehpur Sikri India?

Fatehpur Sikri will meet you at the crossroads of your Taj Mahal trip and Rajasthan adventure via the ultimate Golden Triangle tour.

Fatehpur Sikri is 40 km away from the former capital of Mughal dynasty Agra. So, traveling here by road is absolutely feasible and makes most sense. If you have committed to the Golden Circuit then it definitely will be a road ride for you.

As soon as you reach the market area in Fatehpur Sikri, you will have to change your mode of transportation. You can hire a CNG operated rickshaw to reach the main gate.

Fatehpur Sikri Railway Station (FTS)
This railway station is just 300 m away from the main gate. So, just hop on to any CNG rickshaw and get going!

Fatehpur Sikri Bus Stand
You can board a bus from the bus station towards Fatehpur Sikri via Intra state buses from Idgah Bus Stand in Agra. It is the perfect transportation mode if you are under a budget and you will reach your destination in one and a half hour.

How long can you stroll around this ancient city?

Fatehpur Siri can be enjoyed throughout the day. The gates of this Mughal fortress open at sunrise and close at sunset. So, you have a lot of time in hand to bask in its glory. Enjoy!
Note: The complex closes on Friday.

What are the charges to visit Fatehpur Sikri?

If you are worried that Fatehpur Sikri entry prices will drain your pocket, then throw this delusion out of the window now. We say that because Fatehpur Sikri price ticket does fit in every pocket. Don’t believe us? The prices mentioned below will concrete our statement.

Entry fee for children under the age of 15:

Note: Do you want to save yourself from this chaos? Then, it’s better to plan an iconic tour via a travel agency. Plan this and other Golden triangle tours in addition to some Rajasthan adventures to make the most out of the opportunity. How about giving The Grand Indian Route a chance? We will always be at your disposal. So, why not request a quote for the Golden Triangle tour?

Okay! Now that you know almost everything about this place, it’s time for us to shoot you with some tips that will indeed come in handy. Besides the travel tips for India we’ve already talked about in the previous blogs, here are some tips exclusively for Fatehpur Sikri.

A man of exceptionally impressive management skills. An MBA graduate. He worked for a top German group before he decided to quit following his dreams.

A Guide To Amer Fort - Everything you need to know! | TGIR

The Royal Tales Of Hawa Mahal India- A Guide | TGIR